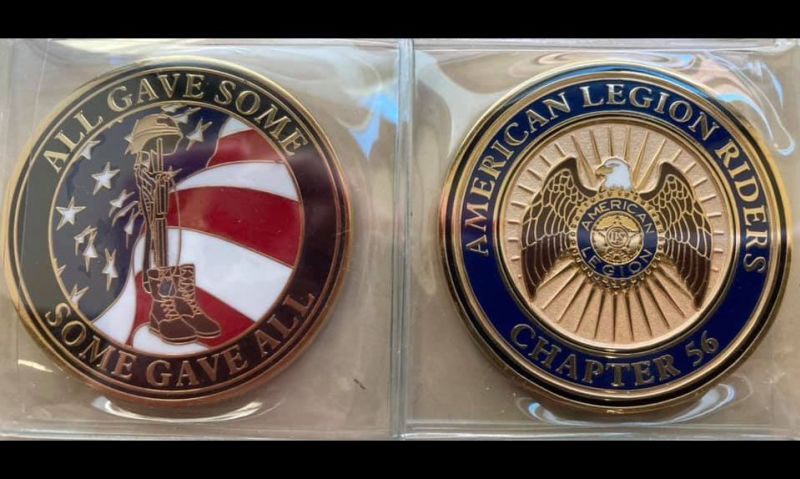 For the past three years around Veterans Day and the holiday season, American Legion Riders Chapter 56 in Albert Lea, Minn., have handed out commemorative coins to veterans residing in area nursing homes. Distributing the coins in person, usually in the facilities’ cafeterias, it’s provided an opportunity to thank the veterans for their service, as well as a chance to form friendships.

But with the coronavirus pandemic restricting visits to nursing homes, Chapter 56 was unable to deliver the coins personally this year. But that wasn’t going to get in the way of the American Legion Riders showing their appreciation to those older veterans, so an alternate plan was devised.

“It kind of sucks that we can’t go see them and talk to them. But we’ve got to do what we’ve got to do,” American Legion Riders Chapter 56 Director Duane Thomas said. “But there was never talk that we were not going to do this. We were going to do it one way or another, and we found a way.”

Thomas said the chapter reached out to activities coordinators at area nursing homes to get a count of the number of veterans living there. Coins are delivered inside of greeting cards, each with a handwritten note, to the nursing homes to be distributed by staff. The chapter expanded the program this year to include the spouses of both living and deceased veterans.

The specially designed coins use a new design each year; planning for the program begins in January. Around 300 coins already have been delivered to facilities in Albert Lea, Blooming Prairie, New Richland, Lake Mills and Northwood, with more to be distributed between now and Christmas.

Thomas said the opportunity in prior years to meet with the veterans personally has meant as much to the Riders as it does to the nursing home residents. “Some of the stories we’ve heard have been amazing,” he said. “It’s hard to believe that right here in Albert Lea we’ve got these kinds of stories. It’s been amazing.”