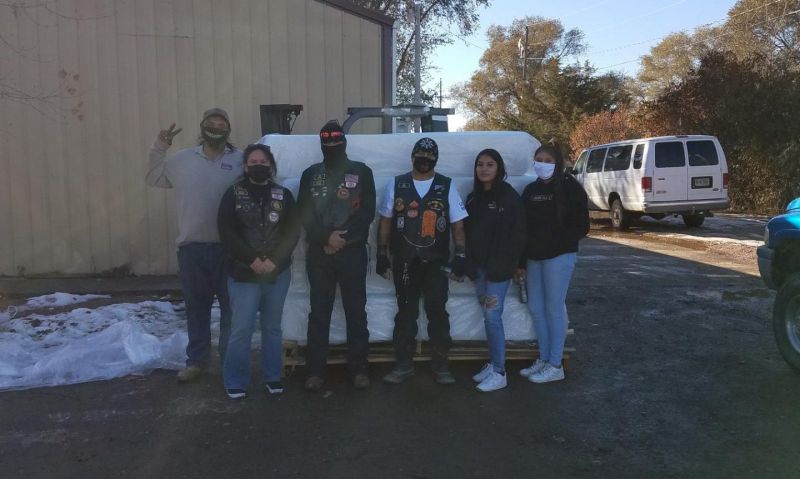 Located on the Rosebud Indian Reservation in South Dakota, Chauncey Eagle Horn Post 125 was chartered in December 1919 and is one of the oldest Native American Legion posts in the organization. Its namesake was assigned to the 42nd Infantry Division, nicknamed the “Rainbow” Division, and was killed in action on July 29, 1918, in the Battle of Chateau Thierry in France. He was the first man to be killed in action from any Great Sioux Nation tribe.

Nearly 98 years later, American Legion Riders Chapter 125 was chartered with a primary mission of providing proper final respects to veterans in the area who passed away.

The chapter regularly takes part in funeral escorts and flag lines, while also taking part in parades, community events and ceremonies while providing support for military families and Department of Veterans Affairs’ facilities.

The chapter was formed shortly after some veterans living in the area met up with American Legion Riders from Hot Springs, S.D., who were providing an escort for a Korean War prisoner of war whose remains had been identified and were returned to his sister in Rosebud.

“(The Hot Springs Riders) told us that we should start something around here,” said Carole Gregg, a U.S. Army veteran who doubles as Post 125 commander and Chapter 125 director. “That’s when six of us got together, joined the Legion and started (Chapter 125). (It was) making sure our veterans are recognized, especially when it’s their funeral and they’re getting escorted.”

Chapter 125’s efforts recently included teaming up with Tree of Life Ministries, a nonprofit in Mission, S.D., that provides food, clothing and shelter to those in need on the reservation. Gregg was contacted by Tree of Life Director Linda Garriot, who shared that the ministry was getting a load of mattresses – approximately 16 pallets full – and wanted to distribute them to veterans.

Chapter 125 put the word out Oct. 28 and two days later had volunteers on hand in the Tree of Life parking lot to pass out nearly 100 twin-sized Tempur-Pedic mattresses to local veterans. In order to maintain social distancing and safety protocols, all recipients stayed in their vehicles and wore masks. Chapter 125’s Riders loaded the mattresses into their vehicles, distributing all but a handful of the mattresses – one per veteran – in less than two hours.

Being able to facilitate distributing the mattresses “was very valuable,” Gregg said. “It’s a low-income area on the reservation, very low income. And the unemployment rate is really high, so anything like this sure helps out.”

Being able to get the mattresses to veterans in need “feels good,” Gregg said, “especially when you know people are struggling with COVID or age, and they can’t work and their income’s low, you can give them something to where at least they can sleep comfortably.”