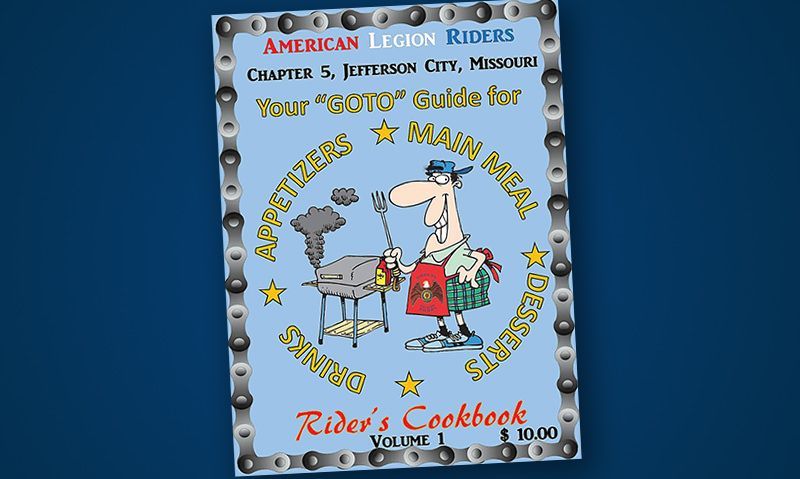 When Dan Levasseur took over as director of American Legion Riders Chapter 5 in Jefferson City, Mo., 18 months ago, he wanted to get the chapter more involved in its community.

“I started doing things like poker runs, and doing cornhole tournaments and domino tournaments, having meals,” Levasseur said. “We’d go break bread with veterans at the veterans homes. We did all sorts of things to build up where we were at.”

The activities helped the chapter raise money that it uses to assist veterans and others in the area. Then a pandemic broke out, bringing those activities to a halt.

“We want to help these veterans and their families, but we can’t do any of these things,” said Levasseur, who also serves as first vice commander for both Post 5 and District 8. “We had to come up with an idea.”

The idea came in the form of a cookbook that Levasseur said was inspired after he and some other Legion Riders were hanging out and someone served cowboy caviar – a salsa-type dish typically made of beans, tomatoes, corn, peppers, onions and spices.

“I said ‘man, this stuff is good. You need to give me the recipe,’” he said. From there came the idea of putting together a cookbook that grew into an 80-page book comprised of military- and motorcycle-themed recipes for appetizers, main dishes, salads, desserts and beverages. The book became available Dec. 3 and features items such as Legion Riders Stew, V-twin Poppers and Road Kill Casserole.

Chapter 5 sought sponsors and was successful enough that the printing costs have been covered. Two hundred books were printed; 150 already have been pre-sold.

The cost of the book is $10, and proceeds from its sales will allow Chapter 5 to continue to provide assistance to area veterans and their families.

And the effort will allow the chapter to continue its support efforts that include providing food and meals during the holiday season.

“It’s great that we can do these things, but we need some sort of vehicle to do it,” Levasseur said. “The way to do it is to make money. You come up with these ideas and some people look at you like you’re half-cocked. But this one went over real good. With people staying home, they want to try new recipes. I think it’s just awesome.”

Click here to view a video Levasseur created to promote the cookbook.