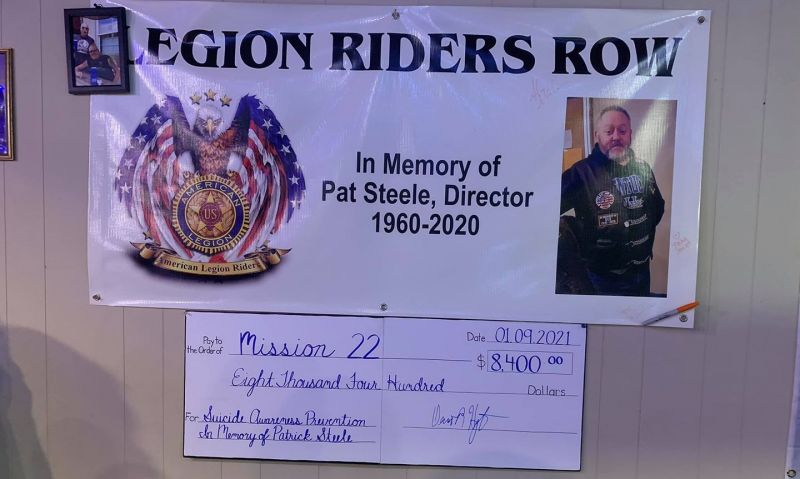 Later that day, Steele – a retired firefighter captain – took his own life. It came as a shock not only to Hylton, but to the rest of the Riders chapter. “It was very shocking to everyone,” Hylton said. “Pat was having some struggles lately, but no one thought anything like that. He had 20-plus years with the fire service … and he continued to work in the ER at both local hospitals after he retired for a while. Obviously the things he saw over the 20-plus years had their effect on him.

“He had recently started a little bit of an inkling that he had coping issues, but nothing that would have led us to believe that he would have committed suicide.”

Hylton succeeded Steele as ALR director, and he and the other Legion Riders knew they wanted to do something to honor Steele. They chose last September, recognized annually as National Suicide Prevention Awareness Month, to stage a ride that both honored and raised funds to assist veterans dealing with mental health issues.

The Riders memorial ride honoring Steele raised $8,400, which recently was presented to Mission 22. A national nonprofit that was started in Oregon, Mission 22 provides treatment programs to veterans for post-traumatic stress disorder, traumatic brain injury and other issues or conditions they’re experiencing. The organization also organizes events and builds memorials to raise awareness about veterans issues, and has an Ambassador program for those wanting to help educate the public on veteran issues, help get veterans into Mission 22 treatment programs and create resources in their communities. Through the pandemic, Mission 22 also is providing grocery and housing assistance to at-risk veterans.

“When we planned the ride, what we initially planned on doing was to do a ride to honor Pat and his memory,” Hylton said. “We wanted to do something to bring attention to veteran suicide awareness and prevention.”

Hylton said the Riders looked for local organizations but settled on the local Mission 22 chapter – which was a welcome donation during a difficult time.

“They were very pleasantly surprised and overwhelmed,” Hylton said. “They were going through their own struggles. With all the coronavirus issues, they have been struggling with their programs continuing and going. They’ve been really restricted. The programs they would do and the fundraising they would do have been all but eliminated with the whole coronavirus thing. They’re struggling to have money coming in to keep their programs going.”

Hylton comes from a military family, where his father, and multiple uncles and great-uncles served in the U.S. Armed Forces. So did his wife, Marjorie, a U.S. Army veteran and member of Post 76.

Being a member of the Sons of The American Legion provides Hylton with a chance to give back to veterans like those in his family. And being a Legion Rider gives him a chance to continue to honor Steele – who he credits with creating a service-first mantra within the ALR chapter – moving forward.

“We plan on having this ride every year in September,” he said. “When we decided to do this in Pat’s memory, we made sure with both his sons that it was OK to use his name with this.

“The thing about Pat’s personality is he got everybody involved. He got everyone excited. And once we got involved and found out what kind of things we could do to help support veterans and support the post and everything, everyone just jumped right in and got involved.”

Save
Tags: Legion Riders, Suicide Prevention, Sons of the Legion