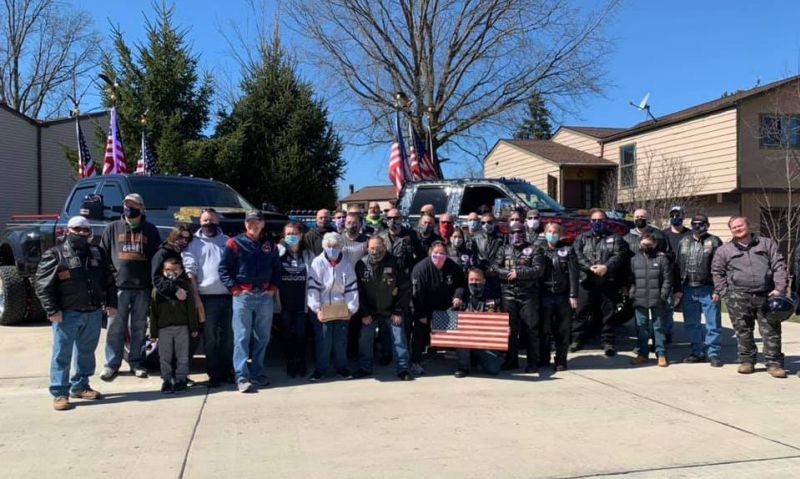 After contracting COVID-19, 11-year-old Ohio resident Owen Caswell developed MIS-C (Multisystem Inflammatory Syndrome in Children), a complication of the virus that can cause inflammation in different body parts – including the heart, lungs, kidneys, brain, skin, eyes or gastrointestinal organs.

His condition has kept Caswell at home since January and would end up keeping him confined at home on March 22 for his birthday. So Caswell’s mother, Kristin Siford, put out a public request for birthday cards to be mailed to her son.

“(Clarke) suggested we try and do something through the Riders to (ALR Chapter 336 Director) Chuck Wiley,” said Lewis Ballard, Chapter 336’s secretary and the post’s historian. “One thing led to another. They started putting the word out. Chuck made a lot of calls out to other motorcycle groups that he knew.”

The result was a March 20 birthday parade consisting of American Legion Riders, other motorcyclists, cars and modified trucks that ran in front of a surprised Caswell – who didn’t know about the procession until it reached his house, where he was able to watch it from his front yard. Chapter 336 also presented Caswell with a wooden U.S. flag signed by members of the American Legion Riders.

Ballard said Caswell was “absolutely thrilled” by the parade, which was another opportunity for Post 336 to remind others of why it exists.

“Our new commander of our post (36-year-old Nathan Haley) … is a younger fella, and he and the past commander have always kind of beat the drum of community involvement,” Ballard said. “We need to be out in the community. We need to make ourselves visible to keep the awareness out there. Any event that lets us reach out to the community and to do something for the local community is very strongly supported within 336.”