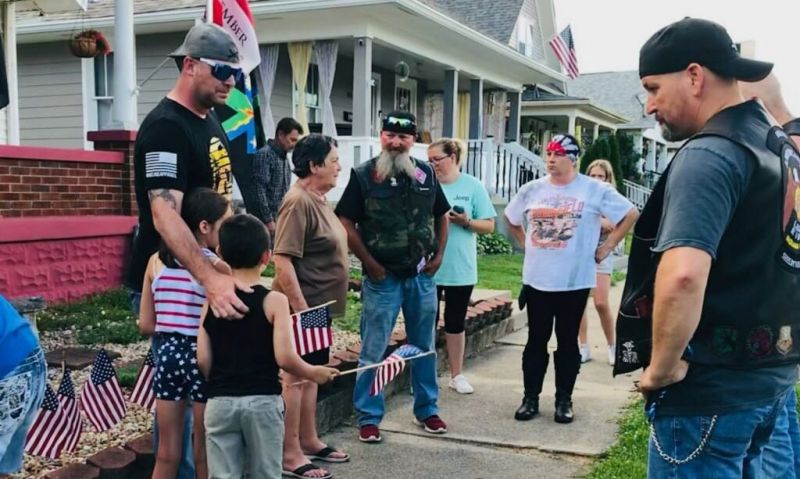 The SEALs were ambushed, with three of the four being killed – including Murphy, whose actions during the battle earned him the Medal of Honor posthumously. A quick reaction force of multiple aircraft were sent in to rescue the team the next day, but one of the two MH-47s was shot down by a Taliban rocket-propelled grenade, killing all eight Navy SEALS and eight U.S. Army Special Operations aviators on board.

Around that time, King, Chapter 70’s membership chairman and Post 70’s service officer, got to know Dill. And since that time, the chapter has somewhat adopted the Gold Star mother, providing assistance when necessary and, more recently, ensuring both the sacrifice of Dill and her son aren’t forgotten.

On June 28, the 16th anniversary of Murralles’ death, King and a group of Chapter 70 Legion Riders joined with members of Veterans of Foreign Wars in a procession to Dill’s home to present her with flowers and flags. The group joined hands to pray with Dill, who shared memories of her son before the Riders offered a hand salute.

“She was so happy,” King said. “We will always take care of Rosemarie. She’s our Gold Star mom at our Victory Post 70.”

Shortly after she joined, King said Post 70 was contacted by some Navy SEALS asking if someone from the post could check on Dill. King went to visit with her and saw a plaque and bench in the front yard honoring Marcus. One visit later, Dill – whose husband Robert served 20-plus years in the U.S. Coast Guard and passed away in 2018 – shared with King stories about Marcus, as well as what it was like to receive the notification that Marcus’ aircraft had been shot down, as well as when his remains were recovered.

King was able to get Dill some help with her home, and her efforts with fellow Chapter 70 American Legion Riders and Legion Family members have provided furniture and necessary repairs to her home and appliances. At Christmas in 2019, ALR Chapter 70 made Dill homemade cookies, and bought her a Christmas tree and ornaments “so she didn’t have to go downstairs and get her old tree out with all those old memories,” King said.

The following year the chapter provided Dill with a poinsettia at Christmas, and also arranged a meeting between the Gold Star and U.S. Sen. Todd Young, and in 2021 King personally took Dill to the Indiana Gold Star Memorial, which was dedicated in May.

King, who deployed to Iraq in 2009, and also is a member of Veterans of Foreign Wars and past state legislative chairman for Disabled American Veterans, said taking care of Dill and others in similar situations is her calling. She said she’s had the privilege of meeting two other Gold Star families, and to meet them and “to be able to help them and bring just a little bit of spark back into their life, I believe that’s what I’m supposed to do. I believe that’s why God sent me here.”