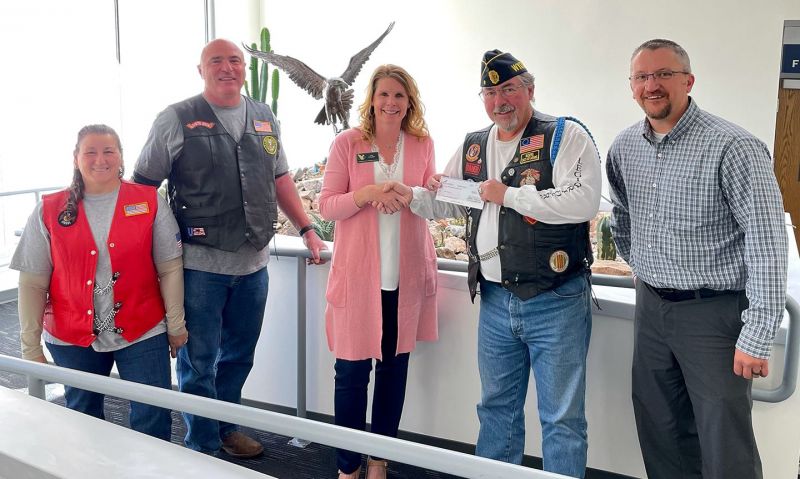 After serving in the U.S. Navy from 2001-2006, Mario Carrasco started his secondary education at a community college. Unsure exactly what college path to follow, Carrasco said he didn’t want to start using his GI Bill benefits until he moved onto a four-year college.

That feeling is why Carrasco and fellow members of American Legion Riders Chapter 6 in Cheyenne, Wyo., started a scholarship program more than two years ago for veterans and veterans’ spouses at Laramie County Community College (LCCC).

In that time, the chapter of around 24 members has raised and donated more than $18,000 to LCCC, recently establishing a second scholarship that will benefit student veterans in certificate programs.

“The idea was if we can help the veterans keep out of their GI Bill until they actually transfer to a four-year university, it would be a really good thing for them,” said the 38-year-old Carrasco, who joined Chapter 6 around three years ago at the urging of past director Mark Pfenning and currently serves as chapter director. “When I got out of the service in 2006 and started going to college, that was the beginning of the post-9/11 era, when the first guys were getting out and trying to educate themselves and build some kind of career. The kind of support systems we have now … they just didn’t exist then. You really kind of had to find your own way.

“I remember that struggle, and I know what it was like. So to have this additional (scholarship) for these students now, I think it’s something fantastic. I wish it was there when I was going to college, and that’s how I know it’s making a difference. I know it would have helped me greatly.”

Money donated to LCCC’s scholarship endowment must reside within the endowment for one year. Carrasco believes one or two scholarships have been awarded via the chapter’s donations so far; the amount is determined by the total amount available through LCCC’s endowment.

A gun raffle and a safe rifle have funded the scholarships. The chapter was able to set up a table at Sportsman’s Warehouse in Cheyenne to sell the raffle tickets. “The manager there, he’s a fantastic guy and a veteran himself,” Carrasco said. “His name is Tim Francois, and he really makes this thing possible. He sets us up with a table in a prime location, and he’s always so helpful in getting us a great discount on whatever item we’re raffling off.”

The safe raffled funded what Carrasco said is a sometimes forgotten path for those planning a career.

“What’s important about that second scholarship is that it’s only going to programs that result in a certification or license of some sort: the trades, vocational,” he said. “A lot of good careers … they’re going to be on the trades side. You can have a pretty decent life by pursuing a career like that. I think young people are starting to see that maybe a direct route to college isn’t always the best choice. Sometimes getting yourself a license or vocation is going to be the new way to go.”