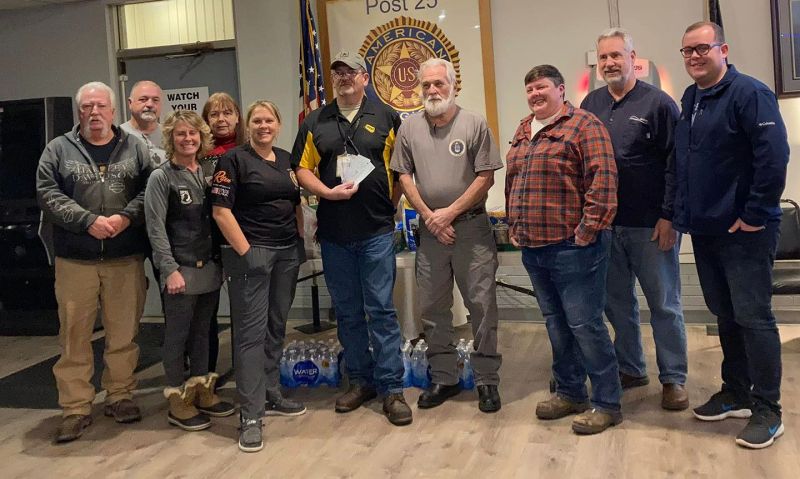 For more than 20 years, American Legion Riders Chapter 25 in Washington Court House, Ohio, has staged a Polar Bear Run in January to raise funds, and collect canned good and other items to assist veterans.

The past few years the chapter has used the ride to raise money for the Military Veterans Resource Center in nearby Chillicothe. The center provides services to any U.S. military veterans, with a goal to “help veterans regain their self-reliance and independence.” Each veteran who uses the center’s services is assigned a Veterans Services Specialist or coach to assist them.

This year Chapter 25 wanted to do something a little different, and the timing couldn’t have been better. Icy roads forced the cancelation of the actual Polar Bear Run, so instead Chapter 25 – with support and help from the rest of Post 25’s American Legion Family – staged a “22 a Day Benefit” to raise awareness about veteran suicides.

“We didn’t want it to be the same thing year after year after year,” said ALR Chapter 25 Director Tracy Thomas, a member of Auxiliary Unit 25. “We wanted to change things up a little bit and draw attention to not only the Polar Bear Run, but the Legion itself as a whole … and the (suicide awareness) benefit.”

In a typical year, Thomas said the Polar Bear Run will draw both American Legion Riders and other motorcyclists from the area, who ignore the cold Midwest temperatures to participate.

“It can get chilly at times, but we still do it, provided it’s not dangerous weather,” Thomas said. “We give out trophies usually for the youngest rider, the oldest and the one who rides the farthest. And, of course, we welcome anybody who doesn’t ride.”

Unable to ride this year, Post 25 instead hosted an event that included a breakfast, a DJ, a raffle and other fundraisers. The post accepted both monetary donations totaling more than $4,000 and non-perishable items, which were provided to the Veterans Military Resource Center.

“They support not any specific area. They support Ohio in general,” Thomas said of the center. “They will go and pick up donated items anywhere, and they deliver to veterans all over Ohio. They’ve shown us that they’ve been successful in what they’re doing and that they are producing good outcomes with that.”

That’s why Chapter 25 provides support for the center, which Thomas said can have an impact on reducing veteran suicides. “(Receiving assistance from the center) can decrease their stress levels if they’re getting help in some way,” she said. “That may be one less stressor that they have to deal with and enable them to think more clearly and know that there is help out there.”

Thomas said she’s been a member of Chapter 25 for around three years and was motivated to move into a leadership position because of her background.

“My dad and mom both rode (motorcycles) when I was young, and I ride myself,” she said. “My brother and father and grandparents have all been in the military. In my eyes this was one way for me to give back since I didn’t serve. It’s supporting veterans.

“On top of that I’m a nurse as well, so I deal with a lot of veterans in my job. It better helps me understand veterans and the daily struggles they deal with.”