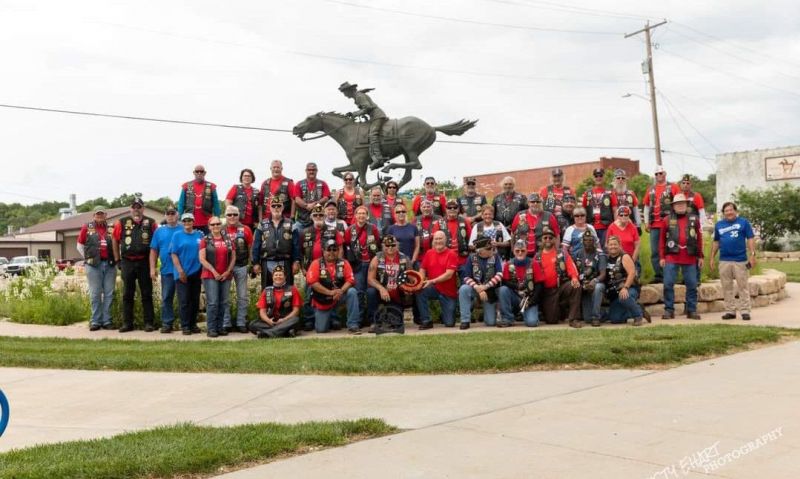 A year ago, the route for the annual Kansas Legacy Run included stops at 10 American Legion posts and wreath-laying ceremonies at 11 veterans memorials.

It will be a similar experience for those American Legion Riders who take part on this year’s ride, which will start June 23 in Independence and finish June 26 in Salina. That’s how those who plan the ride want it to be, and similar to the national Legacy Run, which incorporates multiple wreath layings along the route.

“We’ve always tried to make this as much as possible like the national (Legacy Run),” said Chris Krueger, one of the lead planners for the ride and a member of Sons of The American Legion Squadron 180 in Great Bend. “We’ve stopped at everything from very modest memorials that were put up dozens of years ago, to these glorious, beautiful memorials that are expansive and cost $150,000. The communities that put those memorials up are very proud of them, and they’re very proud of their veterans and those that gave the ultimate sacrifice. It’s worth it for us to honor those men and women.

“We always put out a press release to all the towns we’re stopping in, especially a post stop or a wreath laying. It’s quite the moment for these communities, and it’s really important for us to honor those men and women that the communities are honoring with those memorials, and showing that they’re not forgotten.”

It’s the seventh state Legacy Run for Kansas; last year’s raised more than $31,000 after having to take the year off in 2020 because of the pandemic.

Krueger, who also serves as state SAL liaison for the Legion Riders, has been on every state ride and also has taken part in the national Legacy Run every year since 2008. He said the cause behind the rides, The American Legion Legacy Scholarship Fund, is what brings him back every year.

“For me, and I have to go back to the national Run, it was 2008 and we stopped at Fort Leonard Wood (in Missouri). We had dinner at the local post there,” Krueger said. “Things were still going strong over the Middle East. There was a young woman there, a mother who had three daughters with her… who had just lost their father just weeks in I believe in Iraq. And she was up there in tears, thanking us for what we’re doing for her daughters. And there wasn’t a dry eye in the room. If there’s anything that will set the hook of a cause like that, that’ll do it.”

This year’s ride also has an interesting tie-in with the Missouri State Legacy Run, which will take place June 24-26. On June 25, participants from each ride will join up and ride together, starting in Leavenworth and ending up in St. Joseph, Mo.

“They’re going to come over to Leavenworth to the national cemetery, and we’re going to start there and do a wreath laying and do all that,” Krueger said. “We’ll hit one or two stops in Kansas, and then in the afternoon we’ll ride over to Missouri.”

Registration forms and other information for the Kansas Legacy Run are available here.