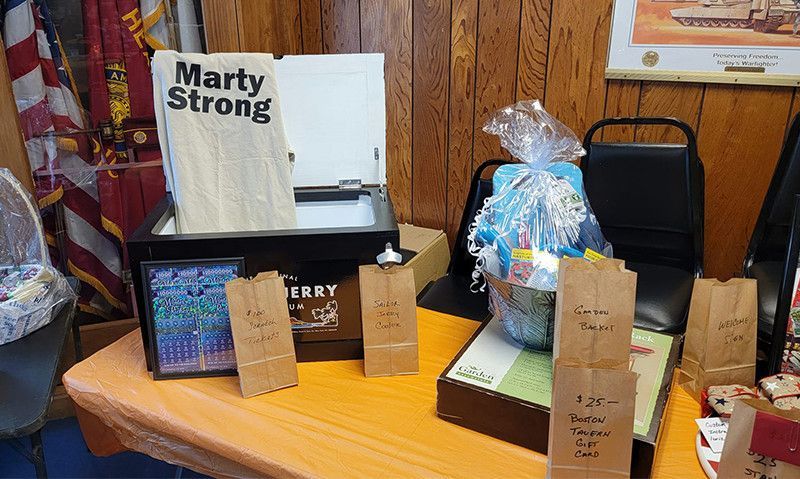 With one of their own battling cancer now for the third time in her life, members of American Legion Riders Chapter 78 in Hyde Park, Mass, wanted to do something to help their comrade. And the results of their efforts are another example of what happens when the Riders rally behind a cause.

On March 19, Chapter 78 hosted its Marty Strong fundraiser to assist Marty Strachan, who again is battling cancer and is a member of both Chapter 78 and Auxiliary Unit 78. Known as the “Chapter Mom,” she’s the wife of fellow Chapter 78 member and Post 78 Legionnaire Steve Strachan.

“This is her third time (with cancer). She’s never made it to full remission,” said Chapter 78 Director Bob Lynch, a member of Sons of The American Legion Squadron 78. “She’s had two different types of cancer. It is Stage 4, so right now it’s treatment and do the best you can to slow it down.

“It’s tough. She’s an amazing woman. She’s a fighter. She comes out and she still has a smile on her face. She still wants to participate and do what she can.”

And Chapter 78 wanted to do something for Marty and Steve, knowing the two are the kind of people who won’t ask for help. So the Riders went directly to the couple.

“Everyone’s kind of dealt with cancer in some way or another,” Lynch said. “You know somebody, but not on an extremely personal level. That brought it to the hospital bills starting to come in, insurance not covering everything. And medical bills are one thing, but also making sure your bills are paid, you have food, you’re not worried about what next month’s going to hold. So that led to the fundraiser idea.”

The Riders presented the idea to Post 78 leadership and were given the go-ahead, as well as support from the post’s entire American Legion Family. Chapter 78’s members are no strangers to fundraisers, participating in other events throughout the state and conducting their own Ride for Kids, which benefits children with pediatric brain tumors.

The Riders began reaching out to local businesses for donations to the fundraiser and were provided gift cards and prizes ranging from $50 to more than $200 to raffle. Tickets for the event were $25 and included a pasta dinner. A local DJ and local comedian each donated their time to provide entertainment at the fundraiser. And American Legion Riders from Chapter 118 in Cohasset, Chapter 106 in Sharon, Chapter 24 in Canton and Chapter 273 in Burlington provided support for the event.

The support from other ALR chapters wasn’t a surprise to Lynch. “You expect it,” he said. “When we started our chapter (five years ago), we made it a point that if it was another chapter in the state and a two-hour ride (away), we’re going out there. We want to be seen. This is what it’s about. It’s not about the ride. It’s about being there for your brothers and sisters. I believe that’s what a lot of the Riders expect when you have events: that you’re going to see the other (chapters) there.”

Lynch said the Strachans have been presented with almost $5,500 raised during the event. Putting together the event as quickly as Chapter 78 was able to do so, and as successfully as it did, again showed Lynch how dedicated a group the Riders are.

“Even if this wasn’t one of our (members), if it was another chapter or charity, we’d still put this kind of effort into it,” he said. “Being one of ours, we took it personal. This gave us that little extra push.”