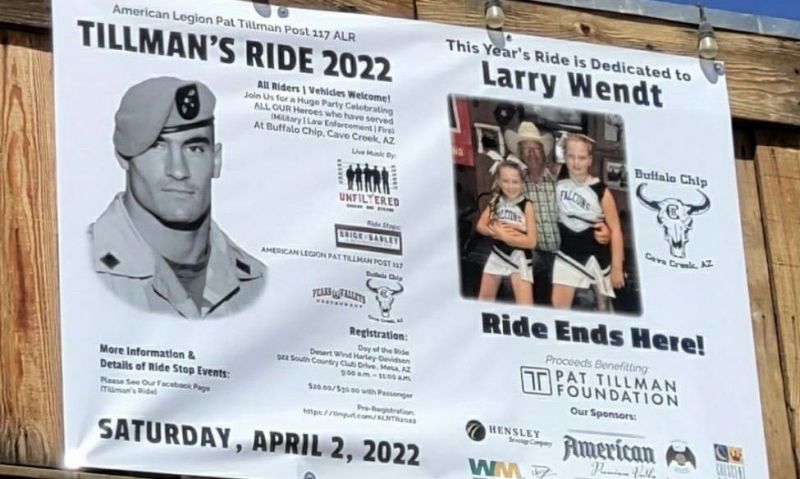 In 2013, Arizona Legionnaire Lars Peterson was watching what had become an annual event in Tempe: Pat’s Run, a 4.2-mile run/walk that raises funds for the Pat Tillman Foundation’s Tillman Scholars. That’s when Peterson became involved, though almost self-mockingly so.

“I was sitting there watching it as all these runners would run by,” said Peterson, assistant director for his American Legion Riders chapter and a past post commander at Pat Tillman Post 117 in Phoenix. “And I’m like, ‘Here we are, a bunch of (Legion Riders). We’re fat, dumb and lazy. We can’t do that.’ So, I thought, ‘They’ve got Pat’s Run. Why can’t we do Pat’s Ride?’”

While creating a relationship with the Tillman Foundation in 2013 and 2014, Peterson and Chapter 117’s Riders staged what became called Tillman’s Ride. Two local entities that assist military personnel and first responders were the recipients of the proceeds from the ride.

And in 2015, when the Tillman Foundation came on board, the ride went to benefitting Tillman Scholars, which provides funding for academic expenses for military servicemembers, veterans and spouses showing high potential for impact and leadership capabilities. To date, the ride has raised close to $100,000 for the scholarship program.

The 2013 ride brought in more than 400 motorcycles, a number that would surpass 600 the next year and continue to grow. The most recent ride took place April 2 after a two-year hiatus due to the pandemic and attracted more than 400 motorcycles. Peterson said that the amount raised this year still is being tallied; he expects to have raised between $11,000 to $12,000.

“We had the two years of COVID when we couldn’t do it, so our attendance dropped down a little bit (this year),” Peterson said. “The last ride we did (before the pandemic) we raised around $14,000.”

This year’s ride received a nice boost from a member of Sons of The American Legion Squadron 117, Mark Gus Scott. A drummer for the rock band Trixter in the 1990s, Scott helped the band achieve top-50 hits on the airwaves and No. 1 videos on MTV. He’s now turned his focus to entrepreneurship, earlier this year launching American Premium Vodka, which sponsored the 2022 Tillman’s Ride.

Peterson said he’ll start planning the 2023 ride in November, lining up sponsors and working on the route and stops. But Tillman’s Ride is just one of several fundraising efforts Chapter 117 involves itself with annually.

“We do many rides throughout the year. One ride may pay to this charity, and one might pay to that charity,” Peterson said. “We try to get them to more military-oriented charities. And there are veteran-oriented rides, like a suicide awareness ride we do for veterans and their families.

“We do a lot of different functions for a lot of different causes. This is just one of them. But we never thought this one would get this big. The first year we did it, I was actually sweating it in the morning … because I didn’t see any bikes coming to the starting point. I was like, ‘This is going to be a failure.’ I was really bummed out. But then all of these bikes just started rolling in. It was an amazing thing. At the end of the day … it was like, ‘Wow, that really worked.’”