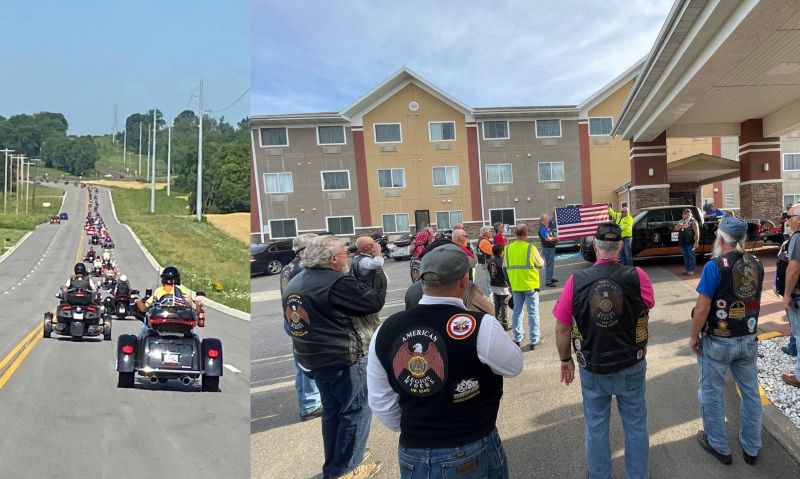 For a few years a handful of American Legion Riders from Missouri have taken part in the Kansas Legacy Run, and vice versa. But this year, a handful became much larger.

“It was awesome,” said Terry Harris, the lead ride captain for the Kansas Legacy Run. “We went through one small town that was having their annual celebration, and everything came to a complete stop so they could watch us ride through. It was pretty cool.”

Brian Sapp, Missouri’s American Legion Riders state director, said the two departments were looking for a way to combine part of a day from each state’s Legacy Run.

“It was very cool,” said Sapp, a Legion Rider and member of The American Legion, American Legion Auxiliary and Sons of The American Legion Squadron from Post 152 in Ashland, Mo. “It was timing. We started kicking around the idea (with Kansas Legion Riders) that, ‘Hey, if everything lines up and the dates line up, why don’t we try to do something where we get both of our groups together?’ The stars aligned and the dates aligned, and they were able to plan their route and be near where we were going to be at on a particular day.”

The Missouri state ride started at American Legion Tirey J. Ford Post 21 in Independence on June 24 and wrapped up at American Legion Post 642 in Sedalia on June 26. Around 64 motorcycles and 86 total participants took part over the course of the three-day trek, which has raised more than $80,000 so far. Sapp said more will come in prior to and during Missouri’s department convention.

One individual donated $15,000 this year, while American Legion Riders Chapter 5 in Jefferson City delivered $10,500. “Any time we get to ride for children, (motorcyclists) are for it. That’s the way it’s always been, and that’s the way it always will be,” said Sapp, Missouri’s District 8 commander. “That right there puts it at the top of our list. And this being one of our scholarships that helps children all over the country, we can create some excitement. It’s a friendly competition, because they all want to be announced as giving the biggest donation in the state. And it also helps that 100 percent of everything we send in goes directly into the fund itself.”

For Kansas, its seventh state Legacy Run has raised close to $23,000, with a final total forthcoming. Barry Maples, chairman of the Department of Kansas ALR Committee and a member of Post 17 in Manhattan, was “very pleased” with this year’s state Legacy Run, which had 44 motorcycles participate. Being able to contribute a substantial amount to the Legacy Fund also is a strong motivation for staging a successful ride.

“It gives us a chance to give back to our fellow veterans and their children … so the scholarship fund can continue on,” Maples said. “We enjoy our ride. There are a lot of things about it. But it’s mainly giving back to the veterans and their families.”

This year’s Kansas ride started at Independence Post 139 on June 23 and wrapped up in Salina on June 26. Along the way were multiple stops to lay wreaths at various veterans memorials and national cemeteries. Those stops are important to Harris, Kansas’ Sons of The American Legion Detachment adjutant and a member of Squadron 180 in Great Bend.

“Both of my parents were veterans … and they’re no longer with us,” Harris said. “I do this to honor them and other veterans. As a member of the Sons, it’s my responsibility to help keep those memories alive. Not everyone came home, and we need to remember them.”

And while being back together on the ride for the second straight year after a one-year hiatus in 2020 due to the pandemic felt good, Harris said it’s the cause that drives the Kansas American Legion Riders.

“We don’t do this for ourselves,” Harris said. “It’s for those children whose parents didn’t come home, or those whose parents were wounded while serving. That is why this cause is so important.”