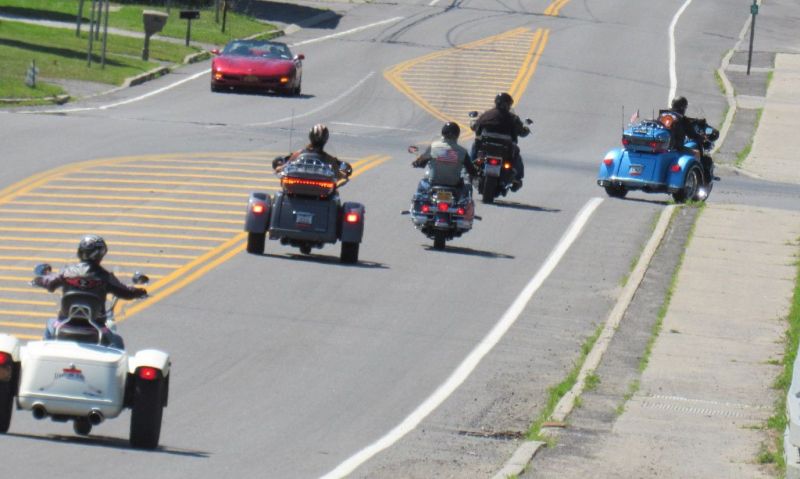 Through intense lobbying by The American Legion, and other veterans service organizations and advocates, the Honoring Our PACT Act was passed in the U.S. Senate in June. The legislation addresses the full spectrum of issues affecting toxic-exposed veterans’ access to VA benefits and care, while also reforming VA’s presumptive decision-making process.

On the local level, American Legion Riders in New York are doing what they can to assist those veterans exposed to toxins during their military service.

On July 9, American Legion Riders Chapter 925 in Norfolk, N.Y., staged their 17th annual motorcycle charity ride. The beneficiary this year was Americans Supporting Armed Services (ASAS) in Potsdam, N.Y., in order to assist the nonprofit’s efforts in advocating for more resources and help for veterans affected by burn pit exposure.

ALR Chapter 925 Director Thomas Morrison, who is a member of American Legion Post 514 in nearby Winthrop, said considering the recent passage of the PACT Act, the timing and cause of the chapter’s annual ride couldn’t have been better.

“A lot of our members are Vietnam-era, and Agent Orange was a huge thing,” Morrisons said. “Having that reflection with the burn pit exposure really keyed up a lot of the guys. If we can help before all these (veterans exposed to burn pit toxins) are dead, that’s what we want to do.”

Chapter 925 has been staging its annual charity ride since the year after its founding in 2005. Previous recipients of the funds raised – which normally range between $5,000 and $10,000 – have been the Children’s Miracle Network, Make-A-Wish Foundation and Fort Drum Wounded Warriors.

“Members go out and look for charities that we think are worthy. We usually try to focus on veterans and as local as possible,” Morrison said. “We came to (ASAS President) Tammy Sauve, and she came and spoke to us. Their biggest thing is burn pit exposure from Iraq and Afghanistan. After she spoke to us, we were convinced. We said, ‘OK, this is the group we’re going to ride for this year.’”

This year’s ride started out at Post 925 and made several stops along the way, including at American Legion posts and other veterans organizations. Following the ride was a meal, raffle, 50-50 drawing and a poker hand.

Morrison said 97 motorcycles, including Chapter 925 Legion Riders and other motorcycle groups, took part in this year’s ride. “This year was a little different because (Sauve) … opened the door to cars and trucks as well. So, we had quite a few people following the column in cars and trucks. I don’t want to even guess what our numbers were. We had a lot of support along the way.”

Sauve told nny360.com that Chapter 925’s ride “is a really important day for us to bring awareness to our cause. We hope that everyone will be a little bit more aware of what our veterans are going through.”

Morrison said he doesn’t have a total yet for the amount raised from this year’s ride, though he estimates it to be around $10,000. “It’s great to be able to do that,” he said, noting that while St. Lawrence County, where Chapter 925 is located, has one ALR chapter. “Because it’s the only chapter in St. Lawrence County, we take in members from all over the county. We’ve got a roster of about 50 Riders. It’s really cool. We all work together well.”