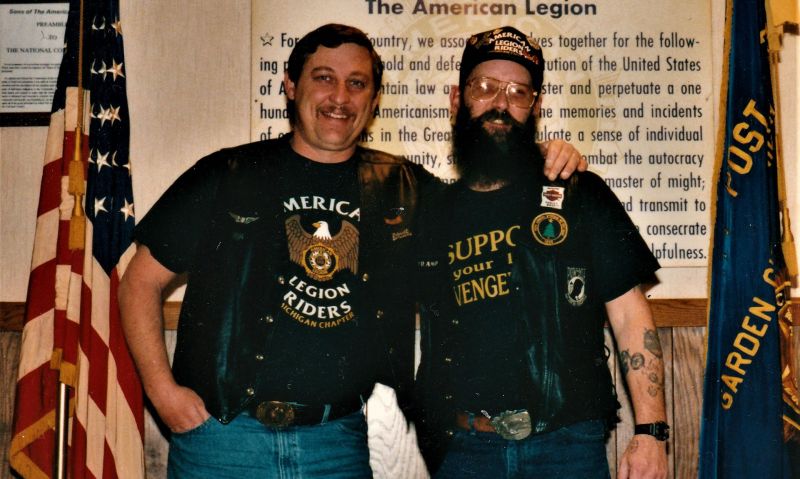 In early 2017, Garden City, Mich., resident Bill Kaledas was doing a nationally syndicated crossword puzzle in the Detroit Free Press when he came across a very familiar clue and answer. The clue was "American Legion _______" vet cyclists' group." The answer: "Riders”.

It was then that it really hit home that a program he and fellow American Legion Post 396 member Chuck “Tramp” Dare had gotten started at the post in 1993 had grown well beyond their expectations.

"I wouldn't say it was a joke, but it was sort of something that I thought was kind of cute," Kaledas said at the time. "But then you realize that the word has gotten out about the Riders. It makes me very proud. The Riders have gotten so much bigger than I ever imagined they would.”

“In October 1993 Bill and I were sitting at bar,” Dare said. “I was (Post 396) vice commander, and he was on me about membership. Behind us were about 50 (Harley Owners Group) members having a meeting. I asked why the Legion didn’t have anything for bikers. He stated that he would find out.”

“The other founding members checked everything out and we hit the road running,” Dare recalled. “The other founders were awesome getting it going. We did runs all around after we got patches made and started other chapters.”

At the time, Dare said Kaledas asked him what he hoped to see when the Riders evolved. “I stated that I wanted to be able to go to any post and have a cold one with another Rider,” Dare said. “Never really thought it would happen. Well in 2001 we had our first Romp in Indiana. Standing on a flatbread trailer looking out on all the patches, I knew that we were on our way to my dream, and yes, I was overwhelmed. I cried like a girl. It touched us both very deeply.”

Billy Johnson – himself a motorcyclist – was the Legion’s national membership director when Kaledas and Tramp presented their idea to national leadership at what Johnson said was around 2000. “I thought it was wonderful,” Johnson said of the idea. “From a membership perspective, we needed something fresh. What I saw was an opportunity to take a class of riders who were predominantly Vietnam (veterans), and we were lacking in membership, and letting that group build this program so we could now have something different to reach out to the Vietnam veteran.”

Johnson said details still needed to be worked out, including ensuring that the program was regarded as an association, rather than a motorcycle club. “Slowly, (national leadership) accepted that this is just a Riders program that is part of the Legion, one more program that’s available to folks that love to ride motorcycles,” said Johnson. “We knew we had stumbled on something worthwhile, but not to the standards it’s grown to now.”

Current Chapter 396 Director Jeffrey McAdams, a member of Sons of The American Legion Squadron 396, said he met Kaledas around 13 years ago and said having Kaledas and other founding members within the post’s Legion Family has been a big benefit.

“We’ve gotten nothing but the best leadership from all of them,” McAdams said. “They were all able to help provide guidance in riding safely, putting on charity rides … they were a key in what I’ve learned.”

McAdams said he had multiple conversations with Kaledas about how big the Riders have become. “I don’t believe any (of the founding members) thought it would grow like this,” he said. “It was just something to get started, have a little fun and support the post. I don’t think he ever thought we were going to be the largest motorcycle organization in the world.”

National American Legion Riders Advisory Committee Chairman Mark Clark met Kaledas in 2013 when the latter was coming to national committee meetings. “I always respected him as the guy who kind of had the idea for us,” Clark said. “You had to respect that. And on top of that he was just a good guy. He was everything that an American citizen ought to be.”

Knowing how quickly the Riders’ numbers continue to grow makes Clark appreciate the vision of Dare and Kaledas even more so. “When they came up with the idea, it was what most motorcyclists like to do. We like to spend time with people who enjoy motorcycling,” he said. “I think they realized early on that if they could organize an association within The American Legion of motorcyclists, that it could be something that would be great for the Legion. They saw what it’s turned out to be: the most visible segment of The American Legion. We really are a rolling billboard. Because of their vision, we extend The American Legion into communities that otherwise would never have contact with us. It’s truly remarkable.”