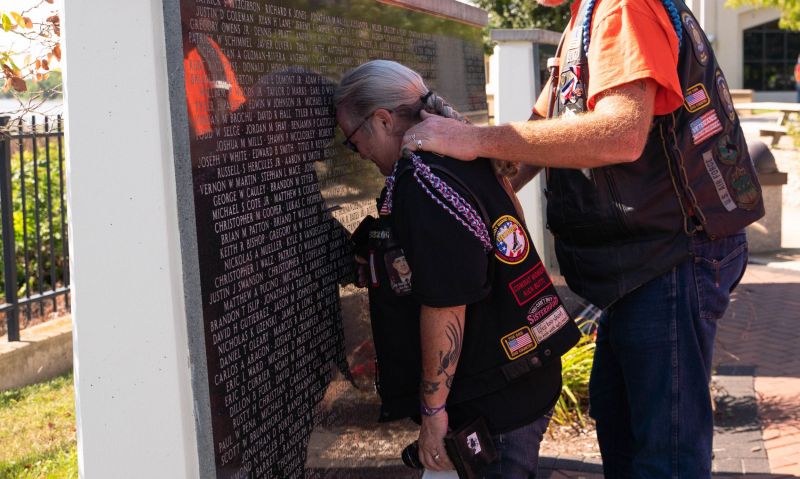 During Day 4 of The American Legion Legacy Run, the 200 or so riders and passengers made a stop at the Middle East Conflicts Wall Memorial in Marseilles, Ill. Dedicated in 2004 and the nation’s first memorial to honor those killed in action while the conflict was still ongoing, the site consists of multiple granite walls with the names of fallen soldiers killed during Middle East conflicts since 1967.

One of those names caused American Legion Rider Cindy Guthrie to put her head against the wall and begin to cry. It was the name of her brother, Army Sgt. Kenneth R. Nichols Jr., who was killed in action at age 28 on Dec. 1, 2009, while serving in Afghanistan’s Kunar province. Even though her brother has been dead for almost 13 years, seeing his name was an emotional experience for the Legacy Run’s VIP escort.

“I’ve never been here before,” said Guthrie, an Operation Desert Storm U.S. Army veteran and member of American Legion Riders Chapter 192 in Evans, Ga. “I’ve known (about the memorial) for a long time. It just brings it to a different level. It brings it home.”

When Nichols was killed, he had four children ages nine months to 6 years old. All of them either are at or are approaching the age in which they could use The American Legion Legacy Scholarship Fund – the cause behind the Legacy Run.

“I’m proud of this organization. I love being a part of it,” Guthrie said. “And I will continue to be a part of it. And I think (Nichols) would have been a part of it, too, had he been alive. He had a motorcycle. He wanted to ride when he got out.”

The wife of fellow Legion Rider and Flight G road captain George Guthrie, Cindy said she still remembers talking to her brother the morning he was killed. “He had just been promoted to sergeant that day, and I was bragging to him that we were going to go for a ride, me and a couple of guys, and he said he couldn’t wait until he got home and was able to go for a ride.

“He wasn’t even supposed to be there that night. He had volunteered for his first platoon sergeant mission, and his last.”

The stop also hit home with Iowa Post 535 Legionnaire James Kearney Jr., the tail gunner for Flight L. On Nov. 1, 2004, Kearney’s son – Army Spec. James C. Kearney III – was killed in Afghanistan at age 22 when his convoy was ambushed near Sharan. His father said the group was coming back from delivering school supplies to a mountain village when his son was hit by a sniper while in his Humvee’s gun turret. James III was the first Iowa National Guardsmen killed in Afghanistan; his name also was on the wall in Marseilles.

It's the third time that Kearney II has visited the memorial. It’s still hard seeing his son’s name on the wall.

“It’s hard to put into words unless you’ve lived it,” said James II, a U.S. Air Force veteran who also spent 15 and a half years in the Nebraska Air National Guard. “This is a club I don’t want anybody else to join.”

James II still remembers the day he found out his son had been killed. Knowing something had happened but not knowing the entire circumstances, he remembers saying, “Lord, whatever it is, give me the strength to get through it. And he has provided very well,” he said. “Everybody has a little bit of God inside of them. With all the sharing that happened to us when we lost James, that teeny tiny little bit they shared, that’s a heck of a lot of power. And all I can try to do is give it back. And that’s what I try to do.”

Both Nichols and Kearney III were honored during a ceremony at the memorial. Legacy Run Chief Ride Captain Mark Clark said everyone on the ride knows someone who died during their time in service and “whose name is carved on a memorial in a small town somewhere in this country. Each of these names has a story, a family, a grieving mother, brother, son, daughter, uncle, aunt, grandfather, grandmother, brother, sister.

“I know all of you, particularly those from my generation that served in the Iraq and Afghanistan wars, you know someone here. Visit them here. Tell them you love them. Let their families feel through your love here that they have not been forgotten.”