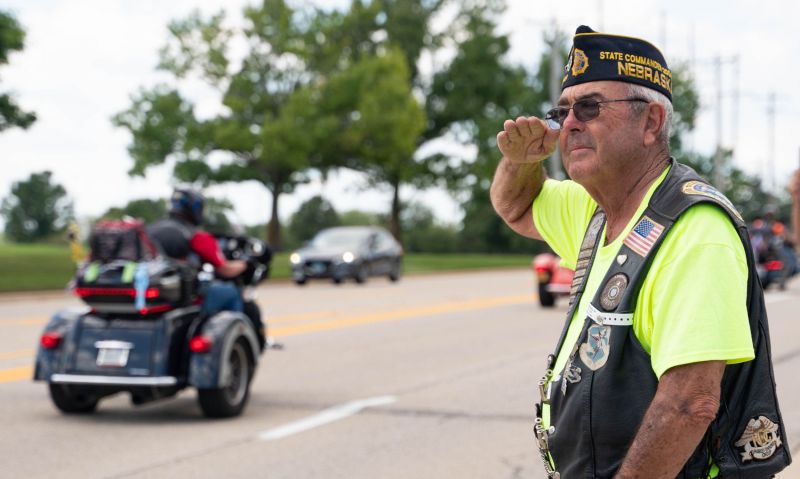 American Legion Rider Rollie Otte at the Department of Illinois in Bloomington, Ill., on Wednesday, August 24. Photo by Hilary Ott /The American Legion

The Legacy Run on Wednesday said goodbye to one of its mainstays since shortly after the ride’s inception. Nebraska Legionnaire Rollie Otte, who has been on 15 straight Legacy Runs, announced last Saturday this would be his last ride.

Following lunch at The American Legion Department of Illinois in Bloomington, Otte headed back home. But before he did, he stood along the exit of the department’s parking lot to salute every motorcycle on the Run as it departed toward its next stop.

Saluting the Riders as they left Bloomington was “the honorable thing to do,” Otte said. “I’ve done this 15 years. It’s my comrades.”

A member of American Legion Post 340 in Morse Bluff, Neb., and the department’s commander from 2004 to 2005, Otte said retiring from the ride “is hard. It’s hard,” Otte said, tearing up and his voice cracking. “So many good friends. So many sites. Our mission for the kids is unbelievable.”

Otte didn’t make the first ride to Salt Lake City in 2006. “I said, ‘What the hell is this American Legion Riders?’” he said. “Then I found out the aims and purposes, and I’ve made every one. I can’t even believe 15 years have gone by. It’s crazy.”

As the last motorcycle passed, followed by the support vehicles, Otte summed it up pretty well.

“That’s it,” he said, walking back toward his motorcycle to head home.

Legacy Run Memories for the Conatsers. Sharon Conatser was the first American Legion Auxiliary national president to participate in the Legacy Run when she did so in 2016.

“Being my first real ‘road trip’ on a cycle, it was amazing,” said Conatser during the Legacy Run’s lunch stop at the Department of Illinois Headquarters – believed to be the first Legion department headquarters to host a Run stop at its facility. “I learned how great the veterans are across the country. We all come together for the main reason we ride: for the scholarships for the kids. And I learned that all walks of life – whether you’re a Legionnaire, an Auxiliary member, a Sons member or a Rider – we pull together when we need to for our community and our kids.

“(The Riders’) commitment is amazing. They ride long distance. If it rains they’re riding through weather. They do so much, but they never stop because they care.”

Conatser’s husband Marty, who served as American Legion national commander from 2007 to 2008 and now is the Department of Illinois adjutant, also remembered his time on the 2008 Legacy Run to Phoenix and still sees how valuable the Riders are to the American Legion Family.

“I had a great time with them,” Marty said. “A lot of people don’t totally understand the Riders, I think. They get a lot of public exposure, and they’re a good influence for the Legion and what they do. It’s just a good face for The American Legion. If you’ve ever been on a ride with them or a charity ride with them, you know the good work they do.”

Illinois Posts Open Doors to Ride. The day’s first and final stops happened at Illinois American Legion posts. The ride made a comfort stop at American Legion Post 105 in Decatur in the morning, then closed the day finishing at Post 77 in Belvidere.

At Post 105, the Riders were treated to water and snacks before heading back out. For Post Commander Allan Jackson, being able to host the stop “was a good thing to do because it’s supporting our veterans. It’s supporting the Riders’ efforts. The Legion’s always been about ‘veterans serving veterans’, and that’s what we’re trying to do here.”

At Post 77, members of the community – including State Sen. Dan Syverson and Belvidere Mayor Clint Morris – joined the post’s Legion Family in welcoming the ride.

That was the intent, Post 77 Commander Geno Kuhnwald said. “To bring the community out here, it’s just a big awakening, and it’s an honor for us to have them stop here,” he said. “One of the things we’re trying to promote is we want the community to be a part of the things we do here. It’s not all about just the post. The post is here to support the veterans, as well as contribute to and support the community. The Legion Riders, what they’re doing, is kind of the same thing.”

Mary Brubach, the Auxiliary’s District 12 president and a member of Post 77’s American Legion Riders chapter, said the visit by the ride meant a lot to the fledgling chapter.

“We’ve only been a Riders chapter for five years,” she said. “So being chosen to be a stop on the national Legacy (Run) is a huge honor that we will never forget. It’s awesome to be a part of, especially for such a young chapter.”

The American Legion Legacy Scholarship Fund helps ensure higher education is a possibility for children whose parents lost their lives while on duty since the terrorist attacks of Sept. 11, 2001.