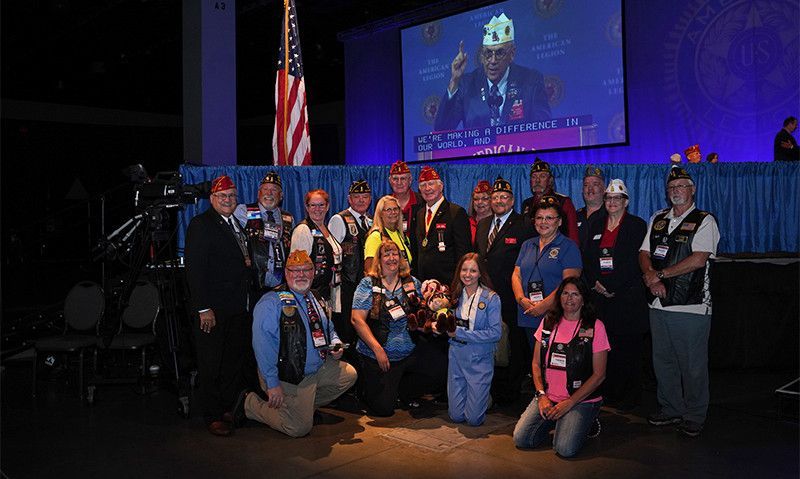 The American Legion Department of Minnesota delivers their $155,000 Legacy Scholarship Fund donation during the national convention in Milwaukee. (Photo by Hilary Ott)

It was a record-setting day for The American Legion Legacy Run and those who make it the single-biggest fundraiser for the Legion’s Legacy Scholarship Fund.

“The national Legacy Run is the single-largest media event in the American Legion Family, and we like to believe we represent the best of us to the public,” said Legacy Run Chief Road Captain Mark Clark, chairman of the National American Legion Riders Advisory Committee. “We take a great deal of pride in what we do.”

The Department of Minnesota American Legion Family again topped the floor donations with $155,000, but several other departments delivered substantial donations. Both the Departments of South Carolina ($97,549) and Missouri ($94,514) approached the six-digit mark, while the Departments of Ohio ($84,855) and Virginia ($83,000) rounded out the top five. Ohio’s state Legacy Run netted more than $74,000 in just its second year, while Virginia’s brought in $80,000.

During the Legacy Run, the Department of Maryland delivered more than $141,000 from its Gold Star Legacy Run, while a post-record $100,000 was donated by Kenneth N. Dowden Wayne Post 64 in Indianapolis.

This year’s 1,164-mile ride started at the USS Alabama Memorial Park in Mobile, Ala., on Aug. 21 and traveled through Mississippi, Tennessee, Kentucky, Missouri and Illinois before winding up at American Legion Post 434 in Oak Creek, Wis. The Ride departed Mobile with 281 motorcycles and averaged 240 each day during the ride. All three American Legion Family national leaders also took part in the ride.

While on stage, Clark noted that next year will be the 30th anniversary of the founding of the Legion Riders, which started at American Legion Post 396 in Garden City, Mich. He noted that one of the Riders’ founders, Bill “Polka” Kaledas, passed away just two weeks before this year’s Legacy Run.

“Today there are approximately 135,000 American Legion Riders in more than 2,300 chapters around the world,” Clark said. “I know (Kaledas) was proud of us. He was proud of what his idea had become.”

The Legacy Fund provides college scholarships to the children of U.S. military personnel killed while on active duty on or after Sept. 11, 2001, as well as for children of post-9/11 veterans with a combined disability rating of 50 percent or greater by the Department of Veterans Affairs. This year’s total marked the eighth time the Legacy Run has surpassed $1 million raised for the Legacy Fund and has raised more than $16 million since 2006.

The Legacy Run also served as an opportunity to promote the Legion’s “Be the One” veteran suicide-prevention initiative. “We believe that if the American Legion Riders get behind a program, it will gain ground,” Clark said. “We’re a rolling billboard for The American Legion.”