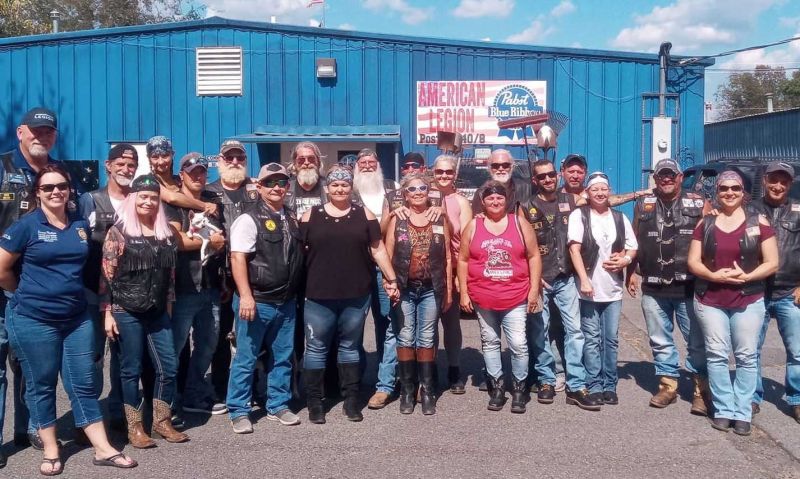 While working for Harley-Davidson in Southern California, Mike Stambough had multiple positive interactions with American Legion Riders in the area.

But when Stambough moved to the Hot Springs, Ark., area a few years ago and joined American Legion Post 13 there, he noticed the post didn’t have a Riders chapter. So he and a few others set out to change that.

A year ago, American Legion Riders Chapter 13 was chartered, and recently the group celebrated its one-year anniversary, as well as its exceptional growth. From the original five members, the chapter has grown to 38 Legion Riders – the largest chapter in the state – and continues to look to the future, and to more growth and community involvement.

Stambough was the chapter’s first director and now serves as the Department of Arkansas’ District 14 commander and Southwest Area vice director for the Riders. He said when he joined Post 13 two years ago, he found a kindred spirit in Rob Taylor, who also had wanted to start a Riders chapter. “We found three other members of the post and got it started,” he said. “But Rob and I were talking about this a couple of times in the past few weeks. This has exceeded our wildest expectations. We both thought by our one-year mark we might have 10 members with the original five. But this has just exploded.”

After forming the chapter, the goal was immediately raising its profile. “My vision for this was to get all the veterans groups in Hot Springs working together on one mission,” said Stambough. “So one of the first things we did was seek out the other veteran riding groups in this area and offer our services to them.”

Stambough said he and Taylor both said they’d hold office for one year – Taylor was assistant director for the chapter’s first year – before handing over the reins to someone else. In stepped Darrell “Shorty” McCoy, who served 17 years in the U.S. Army as a recruiter, to take over as chapter director. McCoy and Stambaugh met through a mutual friend, Combat Veterans Motorcycle Association AR 7-7 Commander Jon Tenbrink, a member of Post 13 and McCoy’s brother-in-law. McCoy wasn’t eligible for CVMA membership because he’d not seen combat, but he and others with similar service backgrounds were encouraged to join Chapter 13.

“He has been instrumental in our growth,” Stambough said. “I’m going to say he has been responsible for at least 60 percent of it. Shorty has a really good vision of where he wants to take the Riders next.”

McCoy said he was able to get some of the fellow motorcyclists he’d ridden with in the past to join Chapter 13. “And if someone was on a motorcycle, I would introduce myself and find out of they were a vet or qualified to be a Rider,” he said. “And instead of me trying to talk them into joining, I’d just be blunt with them and say, ‘Swing by the (post), meet everybody, and you make your own decision.’

“But it wasn’t just me. Everybody had a part in it. I just got them there. It was up to our (Legion Family) to make them feel welcome and want to join. And when people see people having fun and doing good things, they want to be a part of it. And that’s what we’re trying to do.”

Chapter 13 does a church ride every month, visiting a local church to expand the visibility for the chapter. It’s also in the process of getting involved in visiting prisons to meet with the veterans imprisoned there, as well as setting up a recruitment table once a month at the Hot Springs VA Clinic.

Stambough said Chapter 13 currently has 14 members under the age of 40, with the youngest being 21.

“We are actually young people that like to ride,” McCoy said. “It’s more or less actually being together in a family atmosphere. That’s what everybody stresses. It’s addictive.”

Stambough said Post 13 had struggled being active prior to forming the ALR chapter, but since then formation of the group membership and activity all have grown in the post, Auxiliary unit and Sons of The American Legion squadron.

“We’d have five or six (members) show up to meetings,” he said. “Now that the Riders have come in, all of the people that had been at the post for a long time comment to us, ‘Man, this post has changed so much since you came in.’ They’re all excited about the changes, and now they’re starting to get involved again.”

Stambough said the chapter is planning a joint ride with Missouri Legion Riders in the future and will take part in a Pony Express that will travel from post to post in Arkansas to pick up donations for the 2023 Legacy Run. He called the upside for ALR 13 “way high. We’re active every weekend. And now that we have the numbers, even if some of us our unable to attend an event, and there’s three or four events on the same weekend, we can send five or six representatives to each event.”

McCoy said the goal is to hit 50 members by the end of 2022. “And I want to be known in the community not just as a biker group, but someone that helps people,” he said. “We have raised money for people that are in need. That’s kind of the backbone for The American Legion: to help veterans. We’re just trying to push that.”

For Stambough, everything started with making Hot Springs and the surrounding area aware of Chapter 13 its mission.