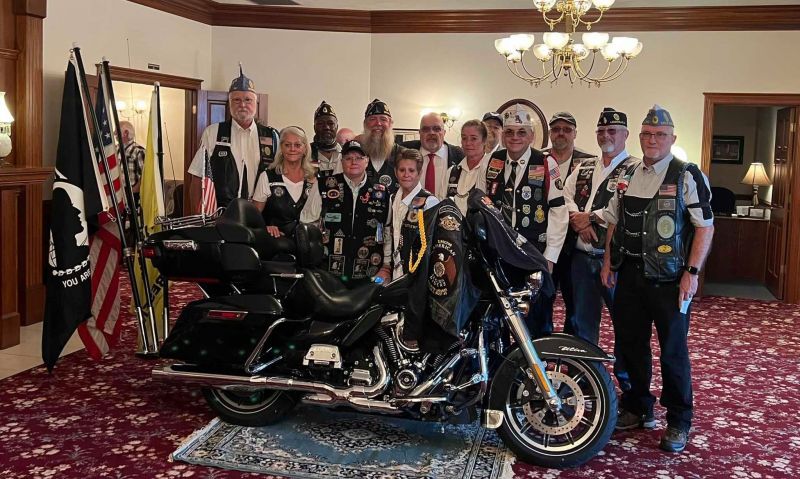 On eight different occasions, Denise Kroeger went with her uncle – longtime Illinois American Legion Rider Jim Cowley – to the Rolling Thunder Run motorcycle weekend in Washington, D.C. There was something she noticed then that she saw again on full display last weekend in Galva, Ill., as Legion Riders from across the nation came to honor her uncle and support his family.

Cowley passed away at age 75 on July 23 of this year, a little less than a month before the start of the 2022 American Legion Legacy Run, of which he served as assistant chief road captain from 2008 to 2021. Legion Riders from states that included Florida, Virginia, Tennessee, Missouri, Kansas, Indiana, Iowa and Kentucky traveled to Galva to attend a family and friends breakfast, the visitation and funeral service, as well as a lunch at Habgerg-Hamlin Post 45, where Cowley was a member for 54 years.

Kroeger said meeting other American Legion Riders during Rolling Thunder was “like instant family. It’s like you saw each other yesterday (and) we have never met each other. For me, traveling with Jim and doing Rolling Thunder, that’s what I felt every time I would be at a Legion post. It did not matter where we were. You were family.

“One of the takeaways (from last weekend) that I had is they have all ridden together in some fashion so many times that it is the extension of family. It’s not just Legion Family, but this is what you do.”

That includes showing up at fellow Riders’ funeral services, which Kroeger – who lives in Iowa – said was something her uncle engaged in often. “He had done the same so many times, and we might not have known about it until he was home,” she said. “He would be gone to this service or gone to that service.”

Denise and her aunt, Janene Felter, are Cowley’s sole survivors. Both were in Galva, where Felter said she was overwhelmed by the show of support from the other Legion Riders.

“My feeling of having them come is one of complete honor for them to join us at this time,” Felter said. “Their respect for my brother, I can only so thank you. There are no words. The miles that they rode. They stayed in the hotel right with us. They’d come up and shake my hand … and the tears in their eyes, it was just a heartfelt tribute to the man that they rode with.”

Felter, who lives in Montana, said Cowley obviously shared information about his own family while among his fellow Legion Riders. “He would come and visit us, or we would see each other at a family thing, and he would talk about his ride family and his Legion family,” she said. “And what we discovered this weekend is, (We’d be asked) ‘Oh, you’re the sister out West. You’re the family out West. Is it your boy that went to the Naval Academy?’ What we know is he was always talking to someone about some part of his family in some way, shape or form.”

Felter said Cowley’s passion, along with the navigational skills he’d developed form over 30 years in the trucking industry, were a perfect combination for helping lead the annual ride.

“I will say that the Legacy Run culminates the finest work of his life,” Felter said. “The synergy between his logistics brain – the virtual road map that was always present in his mind – to have the opportunity to bring that together with his passion for the Legion. Then add the purpose of helping the children get to college to be able to honor their parents’ sacrifice in this way, and to bring it all together in a way he could truly help – that’s his wheelhouse.

“To know the roads and the way the road system in the U.S. goes together, to know the little side roads, the U.S. roads and routes that in many ways may be better than an interstate ever could be – to bring all those things together … just seems to me to be the culmination of all the things he did outside of farming that was paying it forward and doing good and being the very humble veteran and Legionnaire that he’s always been.”

Cowley was also active with the Patriot Guard Riders (PGR) and was a big supporter of the Honor Flight Network annual fundraiser in nearby Bishop Hill. This year’s Bishop Hill Honor Flight Network Benefit took place Sept. 18; Felter and Denise were in attendance. During the event, a memorial program took place to honor Cowley for his years of dedication and support for the benefit and for veterans in general.

Felter won’t be surprised if she and Denise find out that Cowley was involved in even more activities and organizations to benefit and honor others. “It will take us a while to unravel all the things that Jim Cowley was wrapped up in,” she said. “He truly found himself in all of these nonprofit endeavors, and I just simply could not be prouder.”