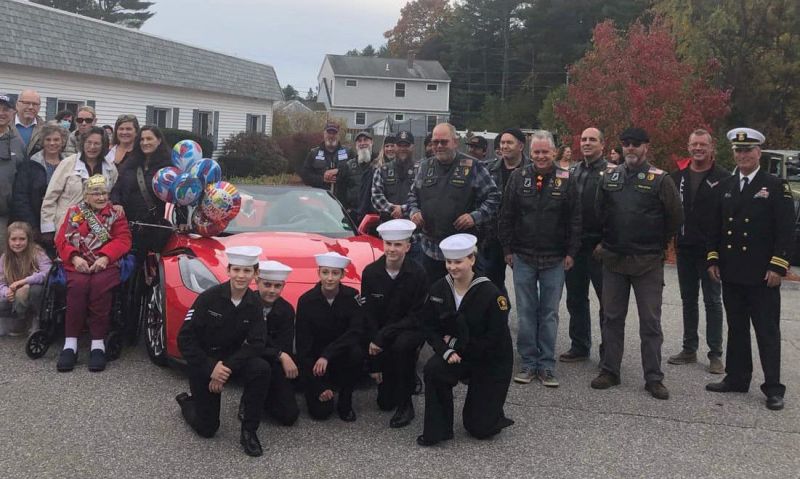 Learning that a U.S. Navy veteran residing in an area nursing home was turning 100, the American Legion Riders chapter at Henry J. Sweeney American Legion Riders Chapter 2 in Manchester, N.H., decided they wanted to honor her – and make sure others did as well. In the process, they also helped grant one of her longtime wishes and came pretty close on another one.

The wife of Rob Randlett, a member of Post 2 and Chapter 2, works at a Bedford Nursing and Rehab Center in Bedford. Through her, Randlett learned that Marian Eisenhower Zalanka was turning 100. Knowing she was a Navy veteran, Randlett wanted to honor her service.

“Being a woman back in the ‘40s, she didn’t have to join the service,” Randlett said. “She did it because she wanted to help, and she needed to get some recognition.”

Randlett learned that Zalanka had always wanted to both ride on a motorcycle and ride in a red Corvette. One of the rehab center’s nurses was able to provide the Corvette and give her a ride.

“We couldn’t put her on a motorcycle,” Randlett said. “So they put her in the red Corvette and we escorted her around the block as a way to show that we appreciate her just thank her for her service and wish her happy birthday.”

Randlett’s daughter is a Navy Sea Cadet, so he reached out to get the youth involved to display the colors during the event. Members of Young & Richardson American Legion Riders Chapter 59 in Hillsborough also took part in the event, as did other area veterans and friends of Zalanka.

Randlett said an event like Zalanka’s birthday party is a way to show that Chapter 2 cares about its community. The chapter also has a project that provides hats and gloves to those in need; the goal this year is to collect more than 1,000 to distribute among the 22 schools in Manchester.

“As far as Marian was concerned, we just wanted to do a good deed and show her that her time in the service back in World War II in the Navy didn’t go unrecognized.”