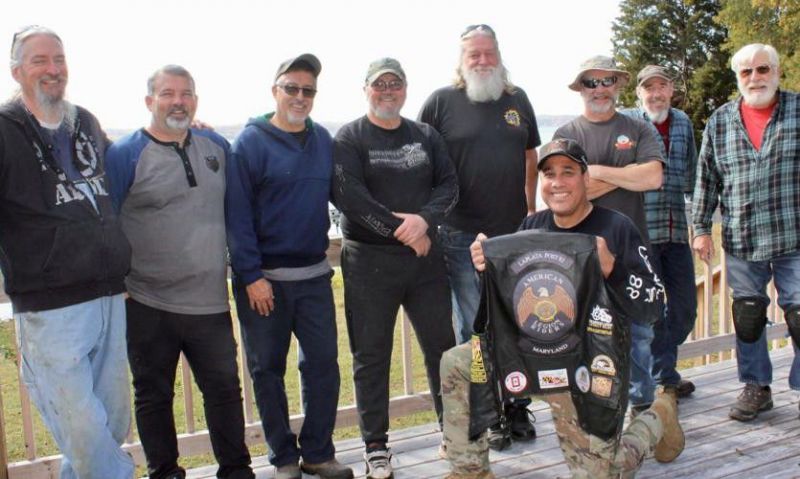 In 2015, Jamie Zayas and fellow veteran Kevin Kling were looking for a motorcycle riding group to join in Waldorf, Md., but were unsuccessful in finding one that fit them. So the pair reached out to then American Legion Harry White Wilmer Post 82 Commander Buddy Hindle in nearby La Plata about forming an American Legion Riders chapter at the post.

Just seven years later, Chapter 82 is thriving, involved in numerous projects benefiting its community and fundraising to the tune of more than $20,000 last summer for the Department of Maryland’s annual Gold Star Legacy Run. That effort, along with assistance from Post 82’s other Legion Family members, allowed the post to donate $34,000 for the ride, which statewide generated $137,000.

The chapter worked with the Maryland Blue Crabs minor league baseball team, which had worn camouflage jerseys during a military and veteran tribute night and then donated them to the chapter to auction off. The Riders also had a fundraising poker run among other activities.

“We worked really hard at it,” said Zayas, Chapter 82’s director and a 30-plus-year veteran of the Air Force and D.C. Air National Guard. “We really pounded the streets, and it all came together. And all of the legs of the (post’s Legion Family) do a really good job of supporting each other.”

In addition to fundraising, Chapter 82 stages a Toys for Tots ride in late November; provides support for the Ddamien Project, which provides homes to former service dogs; and hires an ice cream truck in the spring to drive to the Charlotte Hall Veterans Home to provide cool treats to residents, staff and anyone else visiting the home that day.

The latter is particularly memorable to Zayas. “When you see the ice cream truck pull up, and you see these 80- and 90-year-old veterans line up – I remember being a kid and the ice cream truck would come and all the kids would line up. (The veterans) are doing the same thing. That really warms my heart. It’s a fun thing that we do. It’s pretty special for us.”

Recently, members of Chapter 82 were donating their time in Nanjemoy at Lions Camp Merrick, which provides residential camping experiences for children ages 6-16 who are diagnosed diabetic type 1, and children that are hearing or visually impaired. Veterans also occasionally use the camp. The Riders were cleaning up the camp’s large administrative cabin, which Chapter 82 took over sponsorship of after the chapter previously sponsoring it had closed.

“We usually put aside $300 to $500 a year for it,” Zayas said. “It’s minor maintenance. We’ll do some spring cleaning, and in the fall we knock down the vegetation around it. We’ve rebuilt the whole deck. We do some landscaping. We’ve bought a new washer for the cabin. And we’ll do more than just that cabin.

“Warfighter Retreat has a week-long retreat (for veterans). They invite us to the beginning of the week for the welcoming of the veterans. And they’ll have a dinner at the end of the week, and we have actually come out and played the waiters and waitresses for them.”

Zayas said he has no problem finding volunteers for any of the projects taken on by the chapter. “I bring something up, and I get 20 volunteers just like that. Everybody wants to participate and be a part of it,” he said. “The vast majority of us our veterans. Some are still serving in some capacities. I served for 37 years. It’s in our blood. We see somebody that needs help … and we want to jump in. And we jump in with both feet. It’s really special.”