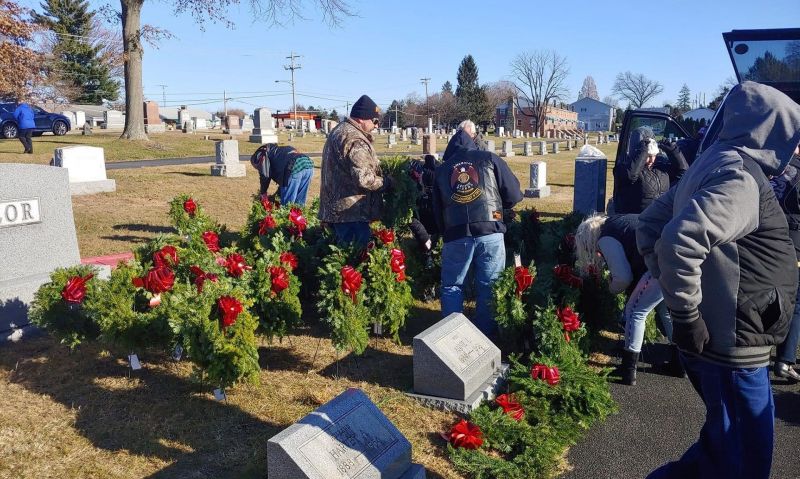 In 2021, the post’s American Legion Family was able to fundraise enough to provide a wreath on every veteran’s grave. And on Dec. 11, the chapter will join others in the community in again hitting that goal – placing wreaths on 247 graves – at the cemetery.

“(They) were placing wreaths on the graves and said, ‘It really looks pretty, but wouldn’t it be great to put a wreath on every veteran’s grave,” said Tiffani Yeager, a charter member of Chapter 791 and the first sergeant-at-arms for Auxiliary Unit 791. “I think it’s important to honor these people and show them we haven’t forgotten them. And to teach the next generation.”

It costs around $2,800 to buy the wreaths and the bows. A member of Chapter 791 has taken on the responsibility of locating all the veteran’s graves in the cemetery. The oldest dates back to the War of 1812, while the newest are from the Vietnam War.

“We have one guy who served in World War II, Korea and Vietnam,” said Yeager, who served as Chapter 791’s treasurer for seven years. “We have fathers, grandfathers and sons. Fathers and daughters, husbands and wives. We have all the branches of service covered, other than the Space Force. And there are at least three women. We’re working to find records to see if there are any more. But it’s a nice range.”

The chapter has included members of the community to be involved, including youth from local baseball and softball teams who assist in both assembly and placing of the wreaths. Each wreath has a red bow on it, along with a tag on the wreath’s stand that states the wreath is from the Shiloh American Legion Family.

Yeager said the placing of the wreaths by the local youth serves as a teaching moment. “I stress that this isn’t something that we’re going to rush through. This is to honor and respect those people, and to show them some respect,” she said. “I tell them, ‘When you lay that wreath, pause a minute, say a prayer, thank them for their service, at least say their name.’ We encourage everyone to take a picture of the wreath they’ve laid and put it on Facebook as well. Sometimes the families (of the deceased veterans) are from out of the area, or they’re just unable to come to the gravesite. So it’s kind of cool they’re able to see that gravesite even if they’re not able to go there.”

Each person who lays a wreath is given a laminated sheet of paper that has a photo of the veteran, if possible, and a picture of the gravestone or marker; the veteran’s obituary, and their branch of service and job they performed in the military.

“It’s so they can read a little about who they were and know that person,” Yeager said. “And we’ve got nine (veterans) who are Purple Heart recipients, and another five we’re trying to confirm. We’ve got a special Purple Heart background on those laminated sheets. That’s new for this year.”

Yeager said Chapter 791’s work at the cemetery is part of a bigger effort to engage and assist others in the area. “We all live in the same community. You’ve got to help each other and teach each other,” she said. “We’ll team up with other organizations in the community and help with their events. We’ve already sponsored a family for Christmas through one of the homeless shelters. Another family we sponsored their Christmas through another veterans organization. We just try to help out whenever we can.”