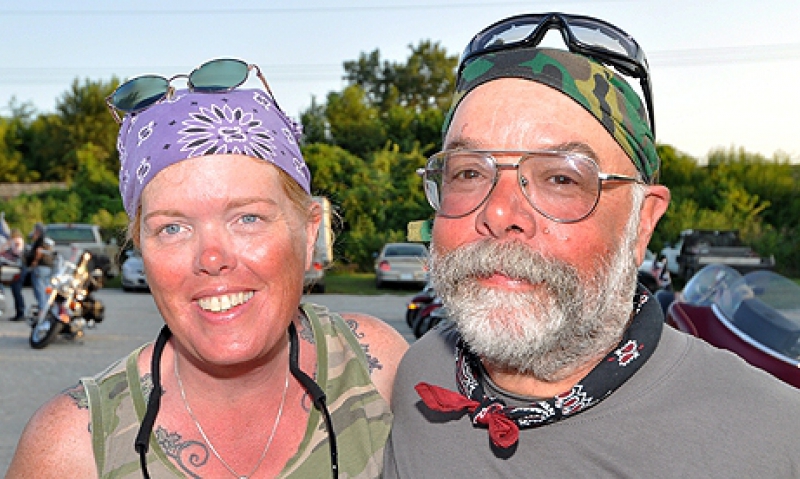 Twenty one years ago, I got into a car with three college friends and drove 1,400 miles in 23 hours to Key West for spring break. I remember how good it felt to finally get out of my car at the hotel and stretch, thinking at the time, foolishly, about what kind of ordeal I had just survived.

But I had driven in what I felt, at the time, was the lap of luxury: my 1984 Pontiac 6000 - a car so great they soon stopped making it, but at the time still a pretty decent and smooth ride. The AC worked, and being inside, I didn't have to deal with the sun until I hit Smathers Beach 20 minutes after arriving in Key West.

The 300-plus participants on the Legacy Run didn't have those luxuries Sunday during the first - and longest - leg of the ride. The group traveled 430 miles, departing from Indianapolis promptly at 8 a.m. and arriving at Post 223 in Higginsville, Mo., 12 hours later. It wasn't 12 straight hours of riding - there were three gas stops (worth a journal entry on their own; to come later this week) - as well as a lunch stop at Post 120 in Effingham, Ill., where the post served grilled pork loin, corn on the cob and baked beans. But it was a grueling day, with temperatures on the road topping 90 degrees.

But I've found out that the riders don't view things in those terms. They look at the big picture. Margaret More and Leonard Misczuk, Legion Riders from Sackets Harbor Post 1757 in New York are on their first Legacy Run. They drove 700 miles last Thursday and Friday to get to Indianapolis for the ride. "And we'd do it again," said Misczuk, ALR director at his post. "It's for the kids.

"The kids" are the sons and daughters of U.S. servicemembers killed on active duty on or after Sept. 11, 2001. The American Legion Legacy Scholarship Fund was established for them, and it's why Legion Riders give up a week or more of their time in August to ride across country and raise money.

"I came back because of the kids," said Corey Moore, ALR director for Post 47 in Fort Wayne, Ind., who is on his second Run. "It was a long day, but it was really well organized, and there were plenty of stops in between. Besides, where can you be with this many friends and ride for this great of a cause?"

That's the second part of why participants show up in Indy each year during what can be a very hot August: the camaraderie. I have been known to get surly from time to time for the somewhat minor infractions of others. Though, I cannot imagine how I would be after 12 hours on a bike on a day like yesterday. But I didn't see anything that resembled that during dinner (ham, scalloped potatoes, corn, coleslaw and dessert) at Post 223. It looked more like a celebration after an easy day of work. It was a gathering of friends.

A side note: October, it will be 10 years since I came to work for The American Legion. I'm not easily impressed by anyone or anything, but I still get amazed by the generosity of the people who make up this organization. Wayne Post 64 in Indianapolis provided a dinner the night before the ride began, then followed that up with breakfast the following morning.

A tip jar was set out during breakfast. Prior to hitting the road yesterday morning, an announcement was made: Post 64 donated the contents of the jar, $342, back to the Run. I imagine the post didn't hesitate when making that decision. Pretty cool, huh?

We head to Kansas City for a tour of the Harley-Davidson Vehicle and Powertrain Operations facility this morning, followed by an event at Post 216 in Bethany, Mo., this evening. It's a little shorter day (164 miles), but I doubt it will be any less entertaining, eye-opening or impressive.