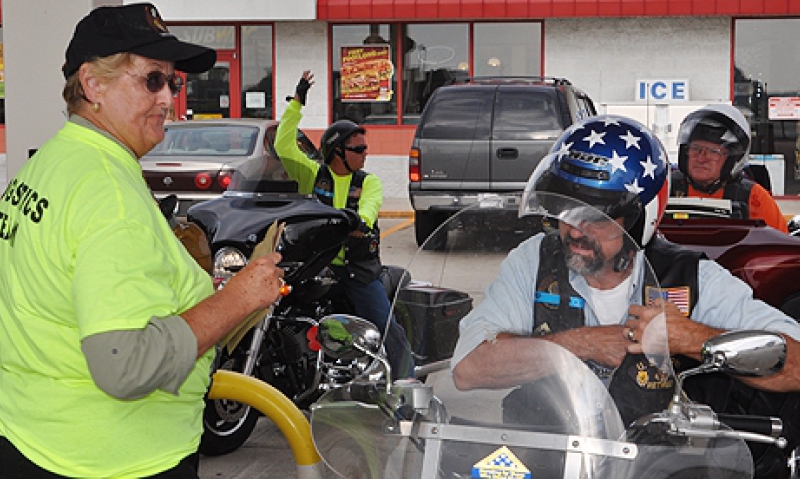 At each fuel stop along the way, more than 200 motorcycles are guided through five or six pumps. It's a team effort between the riders and the Legacy Run's advance teams. Photo by James V. Carroll

When I was young, my grandmother used to drive from Minnesota to visit my family in Indianapolis. When her visit coincided with the beginning of summer. I would typically ride back with her to spend a month or so with the rest of my aunts, uncles and cousins spread out across the state.

My grandmother, or nana, as I called her from the first time I could say it until she passed away seven years ago, was very big on two things: saving money and saving time. We didn't stop at Howard Johnson, Burger Chef or any of the other find roadside eateries of the era. We packed sandwiches and cans of pop in a cooler. And when a can of pop was empty, it became my substitute for a restroom stop - no matter how bumpy the road was. Nor did it matter if there were semis on the sides of her station wagon. It was that, or hold it for 300 miles.

But as much as it may have pained her, my grandmother did have to stop for gas. There was no getting around that (though I suspect she often tried to talk the station attendant down from the price on the pump). We needed fuel.

It was easy for us to drive in and out of the gas station in nana's wood-paneled family truckster. It's a little more complicated for 200 or so motorcycles to try to funnel through a half dozen gas pumps in a timely manner. But that's what happens on the Legacy Run, thanks to the work of the advance team. Gas stops are determined during the planning of the Run route, and the advance team shows up, well, in advance of the contingent of riders, standing ready at five or six pumps. The pumps are held open at the cash register, and each rider comes through, pumps gas, and then moves on as the next rider takes his spot.

A successful gas stop is a combination of, "coordination, speed, joking and a good sense of humor," says advance team member Frank Brown, a Rider from Post 252 in Greenwood, Ind., and a five-year Run veteran. "This is my second time on the advance team, and we keep getting better at it every year. I guarantee that."

Another responsibility of the advance team is helping with parking 250-plus motorcycles. In Effingham, Ill., part of the responsibility of arranging the bikes up and down Washington Avenue fell to Rusty Payne, a member of Post 113 in Lebanon, Ind. "It got a little bit confusing when we had to rearrange a few bikes, but I thought it went really well," Payne says. "It just takes some patience and being prepared."

There were no mass stops for gas on Monday, but there was a trip to the Harley-Davidson Harley-Davidson Vehicle and Powertrain Operations plant in Kansas City. National Commander Clarence Hill praised Harley-Davidson for being "second to none" among motorcycle production companies when it comes to supporting veterans. He presented a Blue Star Corporate Banner to product plant manager Latasha Akoma, who told the Legion Riders, "We are proud and honored for you to come here today."

The Run participants were given a tour of the 450,000-square foot facility and came away impressed. "The tour was awesome," said Sammy Granderson, a member of Post 284 in Colonial Heights, Va., and a three-time Run participant. "I own a Harley and have wanted to tour their plant in Pennsylvania. This gave me a chance to take a tour. I like the part that showed the manufacturing of the powertrain. It's amazing what they can do in such a short period of time."

Dave Schoonover, a member of Post 68 in Hutchinson, Kan., and a road captain on the ride, pledged more money was coming in and says that his state's donations show "that Kansas really steps up behind this cause 100 percent." Fellow Kansas Rider Chris Kruger, an SAL member from Post 180 in Great Bend and an SAL detachment rep on the ride, adds that Kansas has recently been the top fundraiser for the event, by state, "and that's something we intend to keep happening."

Tuesday's schedule includes a stop at the Iowa National Guard's Camp Dodge, followed by an evening event at Post 56 in Albert Lea, Minn.