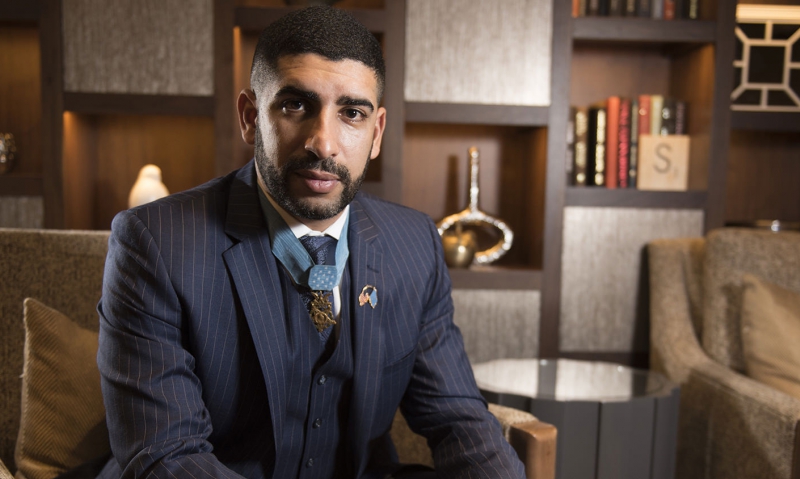 Roughly half of the living 76 Medal of Honor recipients are gathering in Washington, D.C., for today’s inauguration and the Veterans Inaugural Ball — A Salute to Heroes.

The Veterans Inaugural Ball — hosted by The American Legion and the Veterans Inaugural Committee, comprised of 15 congressionally chartered veterans service organizations — is the longest-continuous veterans ball. It began in 1953 at the request of President Dwight D. Eisenhower and offers the newly-elected or re-elected commander-in-chief the opportunity to pay tribute to Medal of Honor recipients.

At the same time, the ball represents an opportunity for Medal of Honor recipients to witness first-hand the transition of power, reacquaint with their fellow recipients and share the medal’s values — patriotism, service, sacrifice, courage, integrity and commitment.

“The inauguration is an example of why I love this country so much — the peaceful transition of power,” said retired Army Capt. Florent Groberg, the first foreign-born recipient since the Vietnam War. “We’ve seen this specific political season be hectic, chaotic and hostile but (Friday) we are going to see President Obama give power to President Trump. It’s peaceful. It represents our country. It just who we are. And very few other countries really do it the way we do. And that’s why we fight and it’s what our Constitution is all about. It’s an honor to be a part of it.”

While this is Groberg’s first inauguration, Roger Donlon has seen many first-hand. As the first Medal of Honor recipient from the Vietnam War, Donlon was a special guest in 1965.

“I don’t know how it happened but I got invited by President (Lyndon) Johnson to all of the balls,” said Donlon, a 29-year member of American Legion Post 172 in New York. “I got to escort his beautiful daughter. Every inaugural has a special dimension to it. My wife first attended in 1969, (Richard) Nixon’s first. There were 350 living Medal of Honor recipients. You talk about herding cats. I was a young captain, 30 years old. I looked at these guys and thought, ‘God almighty. Some of these guys are here 50 or 60 years after their battles. They’re still kicking. What a crew this is.’ We took some lessons from them and learned a lot.”

And, today, Donlon and others are mentoring younger recipients such as Groberg, who received his medal on Nov. 12, 2015.

“I enjoy going to Medal of Honor events because I get to hear the stories of these incredible achievements that these individuals have taken in their lives, not for just the actions that led to receiving the medal but what they have done after,” said Groberg, also a member of The American Legion. “They’re leaders in their communities.

“It’s all about how you want it. There is a big generation disconnect. There are technology — social media — differences. But you cannot take away the experience that these individuals have. If you don’t think you can learn anything from them, you are wrong — especially in the first year.”

For Donlon, events such as the inaugural are a way to spend time with his extended medal family. This week’s celebrations are believed to be the largest gathering of Medal of Honor recipients outside of their annual national convention.

“We get to know the recipients but also their families, their wives, their children, their grandchildren,” he said. “Whenever I’ve come to occasions like this, we’ve tried to bring our children and now our grandchildren.”

Donlon’s children and grandchildren have become part of the extended Medal of Honor family. On Thursday, one of his granddaughters texted him from college to wish him well and pass on greetings to the other recipients.

“She texted, ‘I am going to Mass tonight with my roommate, we’ll say prayers for you,’” he said. “That in itself is a blessing to have a granddaughter who is thinking of not only us, but the other medal recipients and their families who she has met during previous occasions.

“It’s been our extended family. It’s a really beautiful thing.”