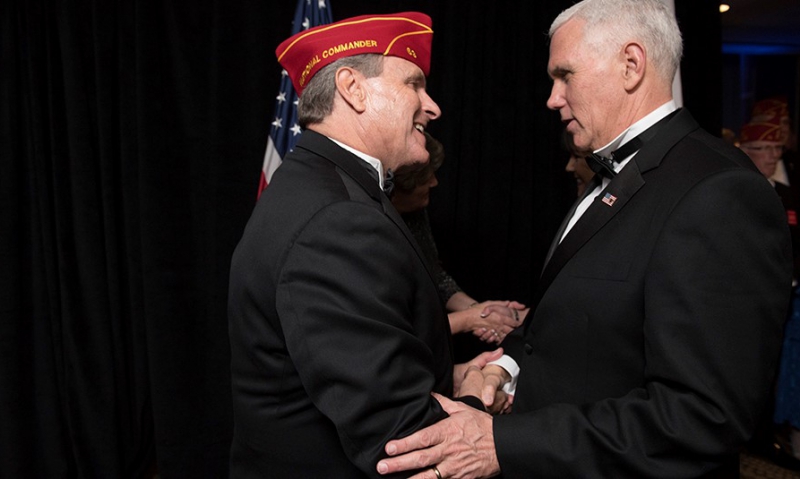 “We are here tonight because we know those who are being honored this evening, the Medal of Honor recipients who are present with us,” Pence said. “I am very humbled to be in your presence. We honor those of you in the room, and those who have come before, and have gone above and beyond. You are an inspiration to all of us. And I know you are an inspiration to our new president.”

The Veterans Inaugural Ball – Salute to Heroes is hosted by The American Legion and the Veterans Inaugural Committee, made up of 15 congressionally chartered veterans service organizations. The ball started in 1953 at the request of President Dwight Eisenhower as an opportunity for the newly elected commander-in-chief to pay tribute to Medal of Honor recipients. Since then every ball has been attended by either the new president and/or vice president.

Pence, who spoke just before midnight as dozens of attendees recorded his remarks from the dance floor, also thanked all of those who served.

“It’s especially humbling to me to be with you tonight,” said Pence, whose father was an Army combat veteran and whose son is in the Marine Corps. “I think it is all together fitting for someone who has not worn the uniform to stop at an occasion like this and make sure that you all know that as we celebrate the peaceful transfer of power in America, we know the real heroes are those of you who have worn the uniform and made the sacrifices.”

Pence also vowed to support key Legion initiatives. “America now has a president who will rebuild our military, restore the arsenal of democracy and give our soldiers, sailors, airmen, Marines and Coast Guardsmen the resources and training they need to accomplish their missions to protect our families and come home safe again.”

During his inaugural address, President Donald Trump alluded to national security. “We will be protected by the great men and women of our military and law enforcement, and most importantly, we are protected by God.”

In one of his first acts as president, Trump signed a proclamation declaring a national day of patriotism. He also spoke of patriotism during his 15-minute long address.

“It is time to remember that old wisdom our soldiers will never forget: that whether we are black or brown or white, we all bleed the same red blood of patriots, we all enjoy the same glorious freedoms, and we all salute the same great American flag,” Trump said.

“It’s a great day here in Washington, D.C., in America and also for The American Legion,” Schmidt said. “We just saw the peaceful transition of power. We have a new administration and a new Congress that has already started up. It’s a great beginning. And The American Legion will be right along to work with the new administration and new Congress, doing what we have been doing since 1919. That is taking care of our veterans, their families and standing up and speaking for our America.”

Schmidt will return to the nation’s capital in about six weeks for the Legion’s Washington Conference, where he will give testimony to members of Congress.

“We review our legislative priorities and Legionnaires from every department go on Capitol Hill and we walk the halls of Congress, sitting down with our respective representatives, talking about the priorities that The American Legion is concerned about. And it’s not priorities just for The American Legion. It’s priorities for all veterans. We do advocate on many issues — keeping VA funded and on track, and also the entitlements that veterans and their families receive. And we don’t forget our servicemembers around the world today.”

It’s important to work with Congress on these issues, Schmidt noted, “because these issues will help veterans long after we are gone.”

House Speaker Paul Ryan thanked The American Legion for hosting the Veterans Inaugural Ball. In his address, Ryan mentioned two priorities for Congress: Fix Veterans Affairs “so veterans can get the care they deserve” and “rebuild our military.”

Ryan also paid tribute to the 34 Medal of Honor recipients in attendance, nearly half of those living today.

“It’s an honor to be here at such an historic event,” he said. “And I don’t mean that today is Inauguration Day. What I mean is not the opportunity to meet just one Medal of Honor recipient but to be in the presence of dozens. It’s amazing and I am in awe.”

Ryan extended his thanks to everyone who has served or continues to wear the uniform. “The reason we can have a peaceful transition of power is because of you,” he said. “Please know that we will never forget who keeps the peace. To all of our veterans and all of our servicemembers, I simply want to say, thank you.”

Among those attending the ball was Ted Roosevelt IV, the grandson of one of the Legion’s founding members, as well as a Navy veteran and Legionnaire.

“I think Grandfather would be delighted to see The American Legion is still thriving and is strong, having an impact on public policy,” Roosevelt said. “Some of the recent things the Legion has done — we all know the work the Legion did in creating the GI Bill — but a lot of people don’t know that we transformed the law about Agent Orange, which originally was thought by authorities in the United States to not cause the damage it did. And, more recently, the work we have done on PTSD, which is very important.”

On the lighter side, comedian and “Price is Right” host Drew Carey served as the ball’s emcee.

“It’s an honor to be here because of all the Medal of Honor recipients,” said Carey, who mentioned that it took him only seconds to accept the invitation. “I knew it would be super cool to do and to bring my son to meet some of these guys. It will provide some inspiration for him and me, too.”

As for his service as a Marine Corps reservist in the 1980s, Carey joked that he “kept the commies out of Ohio,” adding that he got a perfect score on his physical fitness test. “Take that, Medal of Honor recipients.”

On a serious note, Carey mentioned that the “Price Is Right” often has veterans-specific shows. “It’s always consistently humbling,” he said. “At the ‘Price Is Right,’ I’ve had the opportunity to meet five people in the audience who are World War II veterans. And they come with their Legion or World War II hat on. And you don’t often get to meet someone and sincerely say, ‘Hey, thanks for beating Hitler.’”

Medal of Honor recipient Flo Groberg was impressed to not only see the swearing-but the attendance of past presidents, including Barack Obama.

“I was honored to be one of the individuals out there in the crowd,” said Groberg, a member of The American Legion. “It’s a celebration about our veterans, our military. We have incredible men and women out there who are doing great work for us so we can have these types of events, and our freedoms.”

Groberg is director of Veteran, Outreach and Community Engagements for the Boeing Co., one of the ball’s sponsors.

“We have the opportunity to sponsor The American Legion’s National Poppy Day and we are really passionate about it,” he said. “The fact that we get to remember our history and those who didn’t come home, and their families. At Boeing, this is our nature. This is who we are. This is our ethos. It’s everything that we believe in. Supporting our veterans, supporting our military is who we are. I’m glad to be a part of that team.”

Jim Palmersheim, director of military affairs for American Airlines, thanked The American Legion for the opportunity.

“Patriotism is defined by what you do,” said Palmersheim, an Army veteran. “We cannot thank our veterans enough. It’s reflected in our employees. Over 100,000 of my colleagues who give so much to give back. Many of our employees at American Airlines are serving as reservists now. Just know, at the end of the day at American Airlines, all of our veterans and all of those who are currently serving and all of the families here, know that we got your six. We’re here to support you.

National Vice Commander Paul Espinoza of New Mexico attended his first inauguration, calling it “an awesome experience.” He said attending the swearing-in ceremony “was a great honor, representing The American Legion. It was a great speech that President Trump gave, whether you are for or against him.”

Roger Donlon, a 29-year member of American Legion Post 172 in New York, is among the Medal of Honor recipients attending this week’s inauguration festivities. Donlon appreciates the fact that the Legion hosts the ball for the new commander-in-chief and Medal of Honor recipients. “The Legion has been a touchstone for myself, my brothers and my whole hometown,” he said.

Bob Morrill, a member of Post 942 in Webster, N.Y., noted the Legion’s role in nonpartisan support of veterans.

“It’s very important for The American Legion to show its support for veterans around the country,” Morrill said. “For almost 100 years, the Legion has supported veterans with anything they needed. And this is another indication, with the transfer of power, that we are nonpartisan and we support whoever is in office and the administration. We hope for the best for the country and the future.”

Watch a Facebook live video of the ball here.