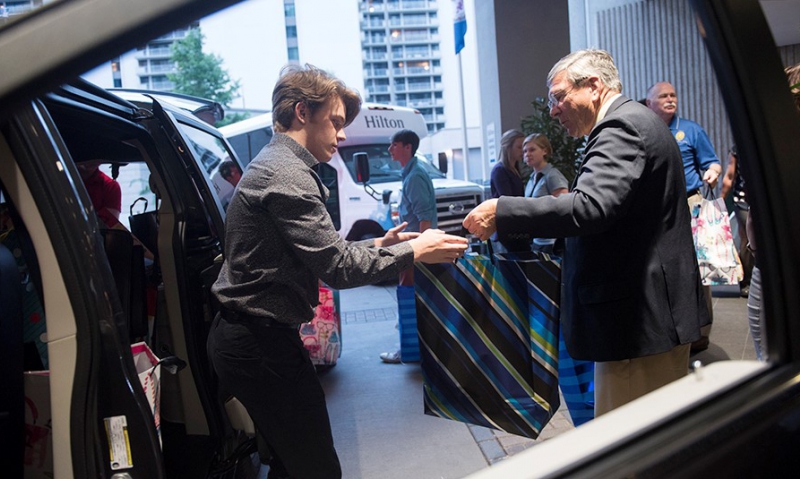 Ryan Zuzulock spent his Sunday evenings eating dinner with his parents, four brothers and his grandfather. The conversations that ensued around the dinner table never revolved around his grandfather’s military service until Zuzulock received the Samsung American Legion Scholarship.

“When I told him about this it opened up a new channel of communication at the dinner table that we normally wouldn’t have talked about; he served in the Korean War as a medic. And he was one of the first people I called when I learned that I won the scholarship,” said Zuzulock of West Deptford, N.J., who is a 2016 New Jersey Boys State alum and Samsung scholarship recipient. “I think it had a special meaning to him just because I was really only eligible for the scholarship because of him.”

Zuzulock is one of the 10 2016 Samsung American Legion Scholarship recipients being recognized in Washington, D.C., by the Legion and Samsung for their accomplishments and future endeavors. The scholars flew into the nation’s capital from their respective hometowns on June 5 and gathered at the Hilton Crystal City with American Legion leadership, staff and several members of the Samsung American Legion Alumni Association board.

For Jennifer Litchfield of Oklahoma City, Okla., winning the scholarship and receiving a trip to D.C. for her achievement is another opportunity for her to “network and grow.” When the Oklahoma Girls State alum learned that she was a recipient of the Samsung scholarship last fall, it was a testament to what her father always tells her – “That if I work hard there’s nothing I can’t achieve,” said Litchfield, who will be attending Oklahoma State University this fall. “I was so happy and couldn’t wait to tell my parents that I won. And I called my grandpa (a Marine in the Korean War) and said, ‘thank you for serving, thank you for allowing this scholarship to be a possibility for me.”

The 10 scholars, who are preparing for higher education this fall, all earned the scholarship for their participation in either American Legion Boys State or Auxiliary Girls State last summer and for their community involvement and academic achievement – each recipient has a 4.0 GPA and ranks in the top 1 percent of their class. Another bond that the scholars share, one that also made them eligible for the scholarship, is that they are direct descendants of a wartime veteran eligible for Legion membership. And like Zuzulock, applying for and receiving the scholarship opened up a line of communication between the other scholars and their grandparents.

For Matthew Barreau, a 1999 Samsung scholarship winner and SALAA board member, he never knew he was a direct descendant of a wartime veteran until the week before he attended Oregon Boys State and his mother told him he qualified for the scholarship because of his grandfather who served in the Korean War.

“This scholarship helps honor something that we’ve done and helps remind us that there’s something we can do in the future for others,” said Barreau, who lives in Newport News, Va., and coaches cross country, track and field at Christopher Newport University. During his time with the 10 scholars, he hopes to teach them that “the past has gotten you here but it doesn’t matter anymore; what are we going to do now? And to find a way to make their future turn into a better situation for somebody else.”

“We have an outstanding group of young leaders, and they have emerged immediately in a dynamic role and have taken on a new meaning of what an American Legion scholar is about,” said Bredeck, whose committee selects the national Samsung American Legion Scholarship recipients.

“This (OCW service project) is going to be a really neat opportunity to give back and learn more about The American Legion,” Zuzulock said. “It will have a special meaning to me because my grandfather was there for me for each step of this scholarship so having an opportunity to physically give back (to veterans) and having that gratification right there is going to be phenomenal.”

The scholars will have another opportunity to recognize veterans for their service during their tour of D.C. memorials, including the Vietnam Veterans Memorial and Korean War Veterans Memorial.

Litchfield said seeing the Korean memorial will “take on a whole new meaning,” for her.

“Going to visit the Korean memorial and knowing that the people we know and love have a connection with it will be really special to us and emotional,” she said.

All 10 scholars expressed their appreciation for receiving the Samsung American Legion Scholarship, noting a “huge thank you because I don’t know if my college aspirations and choices would be the same,” said Zuzulock, who will be attending the University of Southern California in Los Angeles.

The scholarship is going to help Sadie Mae Mace of Paso Robles, Calif., whose father is an Operation Iraqi Freedom veteran and a Legion member of Post 50, further her education at California Polytechnic State University.

“I’m so grateful for The American Legion and Samsung and for the support they show to our veterans is personally important to me since both my parents were active military, and a lot of friends and family are also,” she said. “Being able to participate in different events that support veterans and active personnel is extremely humbling, and I’m grateful for this.”