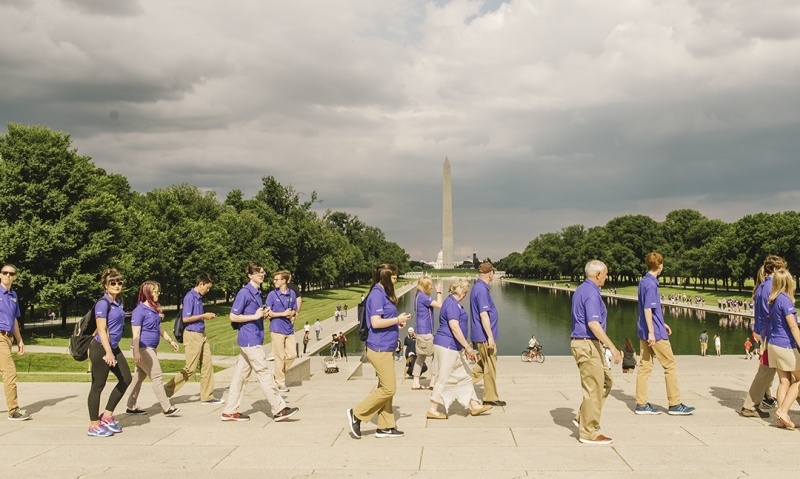 World War II veterans who fought in the Battle of the Bulge, liberated Nazi concentration camps, stormed the beaches of Normandy following D-Day and served in the Women’s Army Auxiliary Corps, sat across from the 10 Samsung American Legion scholars who are in Washington, D.C., on behalf of the Legion and Samsung. Two of the veterans being honored at the World War II Memorial for the 74th anniversary D-Day observance ceremony on June 6, are Legionnaires – Norman Duncan of Post 270 in Virginia and Vivian Bailey of Post 156 in Maryland.

“When you hear about World War II, you think it’s so far ago. But to see people who were actually in the war personifies it and shows that this was real instead of something that I read in a textbook,” said Grayson Stinger of Elizabethtown, Ky.

The armed forces medley was played toward the end of the ceremony and veterans in the audience from each branch stood up to be recognized. This stirred an emotion in Nathan Alvarez of New Orleans, whose late grandfather was a Navy veteran. “When they played the Navy song I got chills. It was just incredible to hear it and think of my grandfather.”

The World War II Memorial was the first memorial visit for the scholars following their recognition breakfast on Capitol Hill. They also visited the Vietnam and Korean War memorial, Lincoln Memorial, Marine Corps War Memorial, as well as the National Museum of American History and Arlington National Cemetery where they saw the changing of the guards at the Tomb of the Unknown Soldier. A popular exhibit at the National Museum of American History among the scholars was The Price of Freedom: Americans at War.

“The Americans at War exhibit made me really grateful, and it made me realize how far we have come to making America what it is now,” said Heather Stout of Hurricane, Utah, who will be attending Utah State University this fall. “This trip has been a good learning experience. It was really cool to see those veterans who served in World War II as it made me feel more appreciative.”

Lindsday Fincher of Wedowee, Ala., enjoyed seeing the Vietnam War portion of the Americans at War exhibit. She has heard stories from her grandfather who served in the war but to actually see artifacts from the war and read more in-depth about it, “it was like ‘Wow. He was a part of that history.’ It just hits you to see it in person.”

A tour guide provided the scholars with a greater knowledge of and facts about the memorials. Even though Connor Wagaman had visited the Vietnam Veterans Memorial before, he learned for the first time that it symbolizes a healing wound. And while visiting the Korean War Veterans Memorial for the first time, he was fascinated to learn that the reflection in the granite walls of the 19 statues makes 38 to represent the 38th Parallel and the 38 months at war. “I’ve never learned as much about the memorials as I have now,” said Wagaman of Wilmington, Del., who will be attending Harvard University in Massachusetts. “I appreciate The American Legion and Samsung for this amazing opportunity and scholarship.”

Daniel O’Hara’s grandfather, who is a Korean War veteran, made him eligible for the Samsung American Legion Scholarship. And seeing the memorial that honors his grandfather’s service and sacrifice is a reminder that it’s “the reason I’m here,” said O’Hara from Robins, Iowa.

The act of service and sacrifice that the scholars absorbed during their tour of the memorials and Arlington National Cemetery has always been a part of Margaret Kleiman’s upbringing. “I grew up as a member of the American Legion Family serving veterans and servicemembers. My motto is ‘above and beyond;’ it’s a way of living life I learned from my family,” said Kleiman of Hutchinson, Minn., who will attend the University of South Dakota. Her father and grandfather are members of Post 96. “I’m truly grateful to The American Legion and Samsung for this scholarship.”

The scholars wrapped up the evening with dinner at The American Legion's D.C. office to learn about the different divisions and the lobbying efforts the organization does on behalf of all veterans and servicemembers.