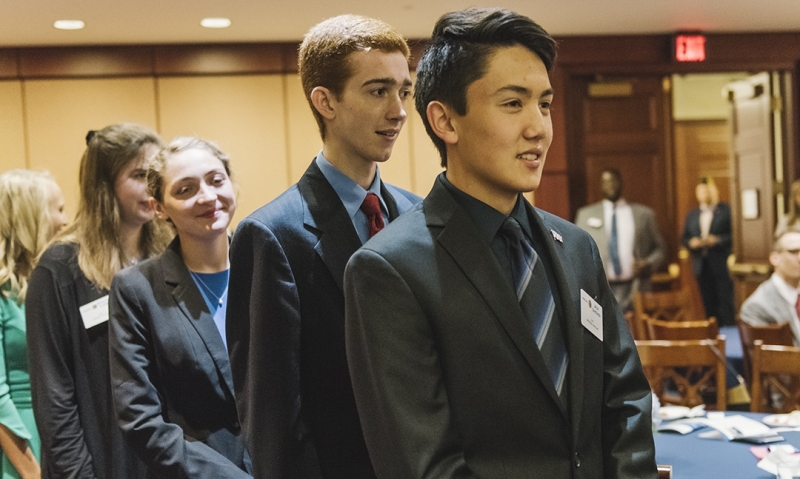 Ten youth from across the nation gathered on Capitol Hill in Washington, D.C., June 6 sharing a commonality – their lives have been enriched by The American Legion as the 2017 national recipients of the Samsung American Legion Scholarship. It’s an achievement they earned through their participation in Legion Boys State or Auxiliary Girls State, being a direct descendant of a wartime veteran, academic excellence and community service.

The scholars' day started with a breakfast on Capitol Hill where the scholars met their state senators, received words of wisdom from Samsung American Legion Scholarship alumni, heard from guest speaker Sen. Tim Kaine, D-Va., and had the opportunity to share their gratitude for the scholarship.

“I couldn’t be any prouder for having received this honor. This scholarship is about supporting my education, which to me is the greatest gift,” said Nathan Alvarez of New Orleans, who will be attending Tulane University this fall. “Education helps us discover who we are and what we’re here to do. And that’s what this scholarship is enabling me to do.”

"The Samsung American Legion Scholarship removes financial barriers and makes intangible dreams materialize," said Claire Seibel of Roanoke, Va., who will be attending Virginia Tech this fall. "The scholarship was formed from a desire to give back to those who served, and answered my why to serve the world with the dream of working for the United Nations."

The appreciation of how the scholarship is supporting and furthering their education, as well as honoring their veteran grandparent, was a sentiment shared by all the scholars. Daniel O’Hara from Robins, Iowa, said, “The Samsung American Legion Scholarship fuels the notion that education is a tool that empowers the children of democracy to uphold its ideals, using the torches carried by people such as my grandfather (a Korean War veteran) to light the way. This scholarship not only honors my grandfather and every person like him, but encourages young people such as myself to become students of democracy and citizens of our nation.”

About 5,700 youth from across the Boys and Girls State programs nationwide applied to the scholarship last year. Out of those applicants, to be selected as a top 10 scholar “you should feel really, really honored,” said Sen. Kaine. “My hope for each of you is that this scholarship is an acceleration of your ambitions to try to do good things for others.”

Samsung bestowed an endowment to the Legion in 1995 for the establishment of a scholarship; it was their way of showing an appreciation for the U.S. troops that came to the aid of South Korea. “There’s probably no company in the country that owes more to those who served than Samsung,” said Dr. David Steel, executive vice president of Samsung. “Because in the ashes of the Korean War in 1953, South Korea was just destroyed. And when our company was founded a few years later there was thanks to the victory in that war as well as the security of alliance that has endured ever since. That has allowed our company to prosper, to grow. So we have that profound sense of gratitude and that’s why years ago we set up this scholarship.

Since the first scholarship was awarded in 1996, there have been more than 2,000 recipients. Eric Bucher of Ohio, a 1997 scholarship alum and a member of the Samsung American Legion Alumni Association board, shared that when he received the phone call announcing him as a recipient, he was “awestruck that I had the honor to receive the scholarship thanks to my grandfather’s service in the Korean War.” It allowed him to focus on his studies and worry less about financing college. And as the 10 scholars prepare to embark on their college experience, Bucher gave them three challenges – “never stop learning … always work hard regardless of the task in front of you … remember that very few things in life are free.”

The understanding that sacrifices were made, and are continually made, by veterans to secure their freedoms and dreams is not lost on the 10 scholars. They made recognition of this in their appreciation remarks.

As the child of an Army veteran and Legionnaire, Grayson Stinger has moved six times but is “driven by the values and sense of community” he has acquired from his multiple relocations. “My generation should be so thankful for the life provided by veterans as they are the ones who paid for us to follow our dreams,” said Grayson of Elizabethtown, Ky., who will be attending the University of Louisville. “Thank you Samsung and The American Legion for the chance to be here, but more importantly, thanks to all the veterans who have provided me and my classmates a peaceful life and a future full of opportunity.”

Auxiliary member Lindsay Fincher of Wedowee, Ala., who will be attending the University of Alabama, added that “by exemplifying the importance of serving others for the betterment of the country, The American Legion is leading my generation to become useful, productive citizens and to reach our fullest potential.”

Before departing breakfast for a tour of D.C. memorials, monuments and museums, Samsung provided each scholar with a new Galaxy tablet to aid in their education and continue the connection with each other that the scholars have made since arriving in the nation’s capital Tuesday night.