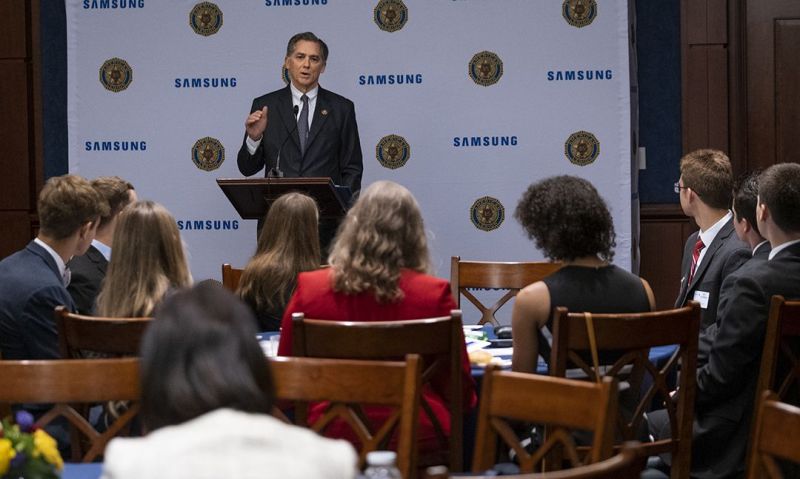 Nine recent high school graduates from across the country gathered in a room at the Capitol Visitor Center in Washington, D.C., the morning of June 5 to be honored for an achievement they all share – the 2018 Samsung American Legion Scholarship. For the past five years, The American Legion and Samsung have brought the 10 national scholars to the nation’s capital for a two-day special recognition that includes time spent with American Legion and Samsung leadership, a tour of memorials and monuments, a visit to the White House and more.

The Samsung American Legion Scholarship is an achievement the scholars earned through their participation in American Legion Boys State or Auxiliary Girls State, being a direct descendant of a wartime veteran, academic excellence and community service. Several thousand applicants apply for the scholarship every year, with 10 being named national scholars and the recipient of a $10,000 college scholarship. One 2018 national scholar could not attend the recognition due to other commitments.

As the scholars congregated inside the Capitol Visitors Center for breakfast alongside Legion Family leadership that included Committee on Children & Youth Chairman Michael Westergren of Arkansas and Auxiliary Education Chairman Lisa Williamson of Alaska, several of them met their state senators and heard remarks from keynote speaker Rep. French Hill, R-Ark. Hill reminded the scholars that they are now ambassadors for The American Legion, Boys and Girls State, and for civic engagement in their communities.

“I want you to reflect on (your civic commitment and the sacrifices made by those who keep us free) because you now have a connection to The American Legion. One percent of Americans are in uniform and they protect the other 99 percent in this country. That’s an awesome responsibility,” said Hill, a Sons of The American Legion Post 1 member in Little Rock, whose grandfather founded the post after his service in World War I. So as the scholars embark on their careers and family life, Hill asked that they “don’t forget your obligation to your country to continue your public service.”

The continuation of service to their country was also reiterated from Dr. David Steel, executive vice president of Samsung Electronics America, during his remarks.

“This scholarships is all about continuing (your community) service and making it a lifetime commitment to giving back wherever you are,” Steel said. “I just encourage all of you to think about what got you to this point in the scholarship, the sacrifice made by your parents and grandparents and great grandparents, and how do you continue to pay that back going forward.”

The scholars had an opportunity to share their appreciation for the scholarship and how it’s helping them further their education and dreams.

“This scholarship is really a great honor. It doesn’t just speak to my achievements but to the many generations of service to this country that have come before me,” said Elise Sopelle of Pequot Lakes, Minn., who will attend the University of Northwestern in St. Paul and pursue a degree in Biblical and theological studies. “My great-great-grandfather served in World War I, my great-grandfather in World War II, my grandfather in Vietnam and my mother served in the Peace Corps in West Africa. Last year when I was at Girls State my brother was at Army basic training. These are the people who have brought me to this point in my life and Samsung and The American Legion are the people who are taking me forward.”

The scholarship is allowing Mattilyn Winburn of Bainbridge, Ga., to pursue a liberal arts degree at The King’s College in New York City. “(The Samsung and American Legion) partnership has literally changed the lives of so many young, civic-minded individuals by removing financial barriers to furthering their education and allowing them to pursue their dreams and I am so blessed to now be one of those people,” said Winburn, who has made it to the top nine semifinalists the past two years at The American Legion’s National Oratorical Contest in Indianapolis as her career goal is to become a constitutional lawyer.

Samsung bestowed a $5 million endowment to The American Legion in 1995 for the establishment of a scholarship; it was their way of showing an appreciation for the U.S. troops that came to the aid of South Korea. Through interest earned on the endowment, the Samsung American Legion Scholarship has awarded more than $6.1 million to 2,164 youth since 1996. “It’s just an incredible tribute to the success of the program,” Steel said.

Following breakfast, the scholars visited Samsung’s new innovative office near Capitol Hill where they viewed Samsung products, such as tablets, watches, frame TVs and the flip board – which takes a place of a white board where you can draw and take notes but have the ability to email the notes. They too met staff and learned about their daily roles at Samsung and career paths.

“Immediately upon coming (to the sixth floor) when we stepped off the elevator I looked up and there is a screen on the ceiling. It’s pretty awesome that you can have a work environment that has a playful vibe to it to be creative,” said Colt Crowson of Madill, Okla., who will be attending the U.S. Air Force Academy this fall. He wants to be a fighter pilot and an astronaut, a dream he’s had since he was little playing with flying toys and jumping off his family’s barn thinking he could fly.

Valerie Puliafico of West Bridgewater, Mass., who will be attending Washington and Lee University in Lexington, Va., felt the Samsung office “is a 21st century workspace. The furniture is moveable to encourage collaboration and the glass walls, literally and figuratively, I think it encourages transparency in the workplace which I think is important.”

Samsung provided each scholar with a new Galaxy tablet to aid in their education and continue the connection with each other that the scholars have made since arriving in the nation’s capital Tuesday night.

“There’s really not words to describe how grateful you are when you’re in this position. I just thank The American Legion and Samsung for their gracious support,” Crowson said. “Being one of those top 10 people that get to come here and experience this is just kind of life-altering.”