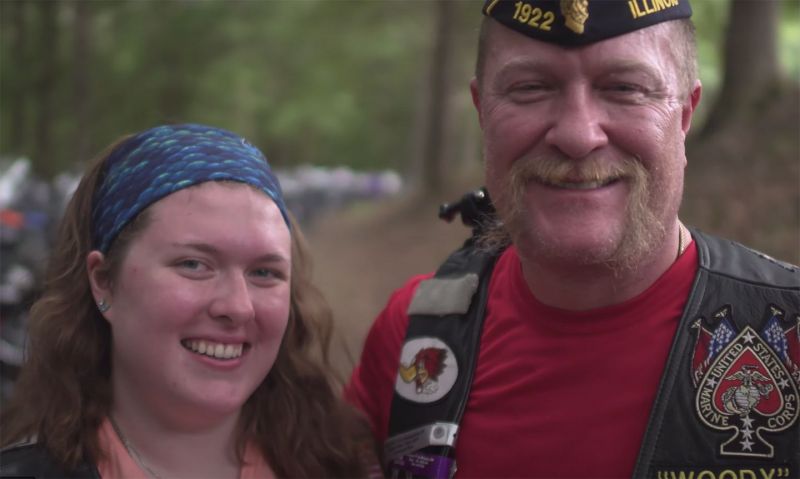 Last August, Deanna Woodburn rode on the back of her father’s motorcycle for over a week. The trip was one she had been waiting for – a promise made by her father that would happen when she turned 18.

“It was so much fun,” said Deanna of Normal, Ill. “I always wanted to go on the ride because I thought about my dad and grandpa going on the ride.”

Deanna’s grandfather is the late Terry Woodburn, who was the longtime Department of Illinois adjutant and former chairman of the National American Legion Riders Advisory Committee. He passed away in June 2015. “There were points along the ride where I was like, 'I wish he was here so the three of us could ride together,'” Deanna said. “But on the same hand, I knew he was.”

It was brought to the attention of Deanna and Chad during the Legacy Run that she was a third generation Woodburn to be on the ride. “I don’t think either of us had ever thought of it that way,” Chad said. “It was a pretty neat and emotional moment in time. I knew it was going to be a special week with her riding with me.”

Deanna and her father rode from Department of Illinois headquarters in Bloomington to Post 347 in Lady Lake, Fla., where the Legacy Run departed from on Aug. 18, traveling through six states before arriving in Indianapolis for the 101st national convention. Chad was the end flight leader, which meant he and Deanna rode in the back of the more than 240 motorcycles who participated in last year’s Run.

“From the front my grandpa always said you look back in your rearview mirror and you see nothing but headlights. But from the back it’s a whole different thing because you see taillights and you see the stream of bikes ahead of you and it’s the most amazing thing in the world,” Deanna said. “I swear I took about a million pictures.”

The annual Legacy Run raises money for The American Legion Legacy Scholarship Fund, which provides scholarships for children whose parents lost their lives while honorably serving on active duty on or after 9/11, as well as for children of post-9/11 veterans with a combined 50 percent or higher VA disability rating. During the 2019 Run, the Riders brought in more than $1 million in donations.

To donate to the Legacy Fund through a virtual program now through Sept. 30, click here. Thank you for your continued support, and we look forward to riding with all of you next year.

“I physically helped raise that money,” Deanna said. “With the Legacy Run you get that … to see where the money is coming from firsthand. You’re in the moment, you’re in the experience, and you feel the atmosphere.”

To her surprise, Deanna became a recipient of the scholarship she rode thousands of miles in support of and helped fundraise for.

Deanna received a voicemail on her cell phone from National Headquarters saying she was a 2020 American Legion Legacy Scholarship recipient. She dropped her cell phone in shock. “I was so happy. I never thought I would actually get it,” said Deanna, who is starting her sophomore year at Johnson & Wales University in Providence, R.I. “I started to cry so hard because, I still get emotional thinking about it, I not only got a big hug from my mom but I felt this huge hug and it wasn’t someone physically there … it was someone spiritually there. Just gave me this huge hug and it was my grandpa. I could hear him talking to me and he said, ‘I am so proud of you.’ It’s like he’s still trying to take care of us.”

Deanna then called her father at work, the one who made her eligible for the scholarship.

Deanna comes from a long line of military service, and “was born into the Legion Family.” Terry signed her up for Auxiliary membership the day she was born. She now serves as the secretary for Auxiliary Unit 635 in Normal. “Helping veterans is my whole life. And I love it.”

She is thankful for being a recipient of the Legacy Scholarship, and of her father’s sacrifices.