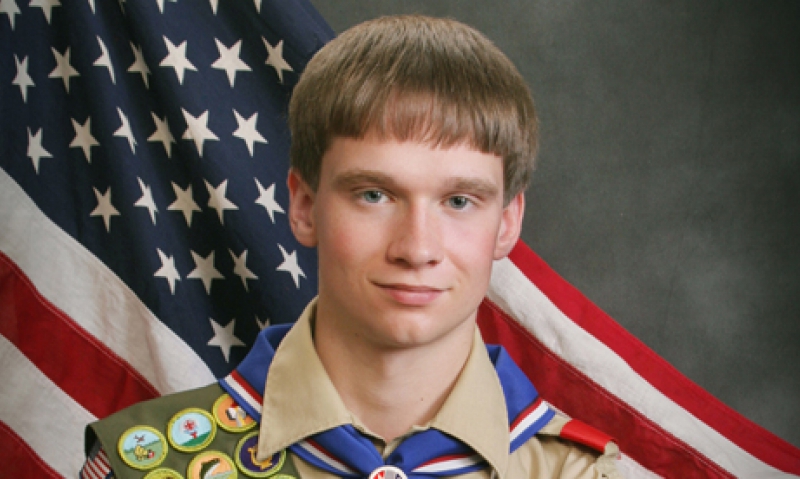 Eighteen-year-old Joe Phillips of Fond du Lac, Wis., is The American Legion Eagle Scout of the Year for 2010.

Eighteen-year-old Joe Phillips of Fond du Lac, Wis., is The American Legion Eagle Scout of the Year for 2010. The St. Mary's Springs High School senior will receive a $10,000 college scholarship for the award, announced Wednesday at The American Legion National Headquarters in Indianapolis.

The award recognizes Phillips' practical citizenship at school, scouting, and his passion and commitment to the U.S. flag and all that it represents. His project included planning, coordinating and executing a community drive for unserviceable U.S. flags, culminating in a formal flag retirement ceremony on Flag Day, June 14, 2008, at Izaak Walton Conservation Club in Fond du Lac.

He organized, publicized and set up collection points for the three-week drive that resulted in the acquisition of 2,900 flags. Working with The American Legion, he coordinated the formal flag retirement ceremony where U.S Rep. Tom Petri (R-Wis.), State Assemblyman John Townsend and City Manager Tom Herre provided remarks. Phillips enlisted 57people along the way to ensure the success of the project.

Phillips is listed in the Who's Who Among American High School Students, a publication and Web site that earmarks high school students who have excelled in academics, extracurricular activities and community service. A recipient of the Young Adult Gold Presidential Volunteer Service Award, he is a member of the National Society of High School Scholars and the recipient of awards in national speech and drama; history and government; fine arts, mathematics, leadership and service from the United States Achievement Academy.

A member of the Maximillian Singers, a professional young adult song and dance troupe, he performed with the Milwaukee Symphony Orchestra at Uihlein Hall. The valedictorian of St. Mary's Springs Class of 2010, he plans to pursue a double major in choral and general music education with a minor in theater at the University of Wisconsin in Eau Claire and eventually obtain a doctorate and become a professor of music.

Phillips has been an Eagle Scout since 2008 and a runner-up in The American Legion's 2009 Eagle Scout of the Year competition.

Click here for the Eagle Scout of the Year Nomination Form