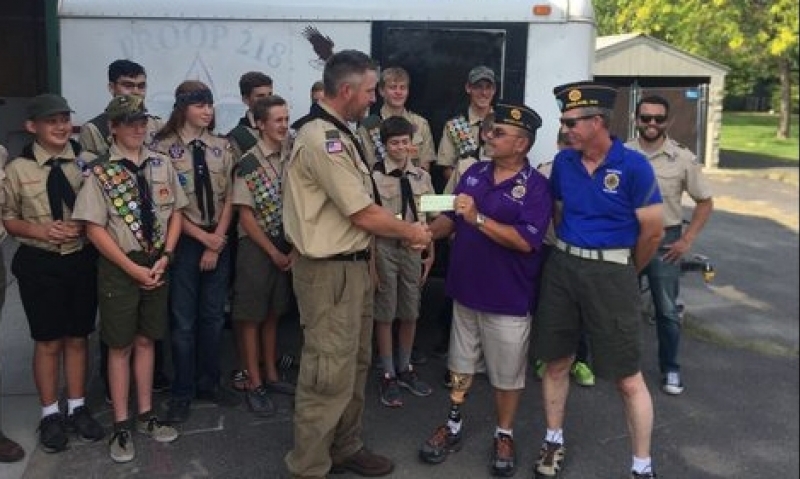 American Legion Post 9 in Spokane, Wash., already sponsors both a Young Marines and youth Seabees program. But when the post found out that a local Scout troop that it does not sponsor was in trouble, the membership quickly stepped up to help.

Boy Scout Troop 218 had its trailer, packed with thousands of dollars in gear, stolen recently. While the trailer was eventually recovered, though damaged, most of the equipment was gone, putting a damper on the Scouts’ upcoming rafting trip to Montana.

"We have a troop of 50 boys so you can imagine how much it takes," Scout Master Richard Parrish told television station KXLY 4. "It was plum full from the floor to the ceiling, five units of patrol gear, all the pots and pans, Coleman stoves, troop tents and spatulas."

Post Finance Officer Jeff Hess heard about the incident on a local television station and shared it with newly elected post commander Michael Bondurant, who was quick to act.

“Normally we’d bring something like this to the regular (monthly) meeting, but we don’t meet in July and August because of conventions,” Bondurant said. “I was trying to get the check out to them (before their rafting trip), so I made a telephone call and got a vote from the (executive) board.”

Bondurant set up a meeting with the Scout troop and asked that the troop be dressed in their uniforms. “I told them we were bringing a $4,000 check,” Bondurant said. “They were pretty excited about it.”

Post 9’s American Legion Riders chipped in $500 of their own to the cause. Bondurant said helping the Scouts was a no-brainer. “We’ve been involved with the Boy Scouts for 100 years,” he said. “We’ve had lots of Eagle Scouts in our post and in our district. Even our department commander is an Eagle Scout. It was just the right thing to do.”

The American Legion Eagle Scout of the Year will receive a $10,000 scholarship. Three runner-up scholarship awards will be granted in the amount of $2,500 each.
VIEW FORM