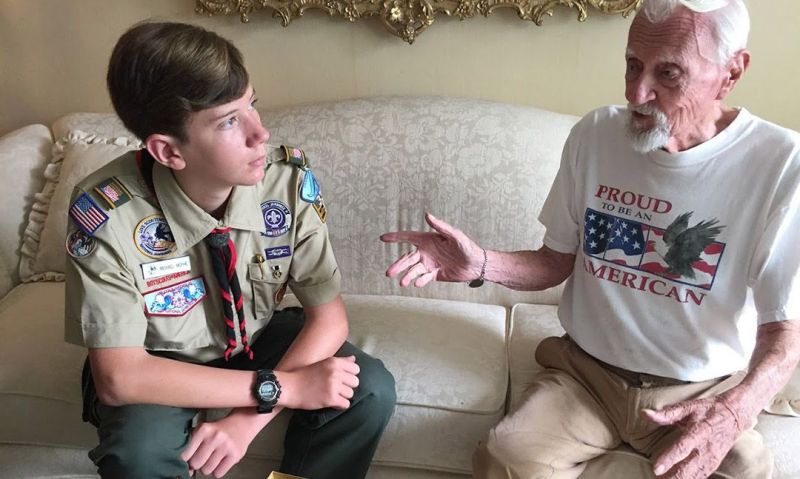 Michael McPhie of Irvine, Calif., has been named The American Legion’s Eagle Scout of the Year for 2020. As a recipient of the award, he is receiving a $10,000 college scholarship.

McPhie was nominated for the award by the Department of California and is a 15-year-old sophomore at University High School with a 4.0 GPA. He has been active in Scouting since 2011 with Unit 749, and earned his Eagle Scout rank in March 2018.

McPhie’s Eagle Scout project honored veterans in Orange County by collecting their military and war experiences through oral interviews for the Veterans History Project at the Library of Congress in Washington, D.C. The archived interviews will allow “current and future generations of Americans to hear directly from these veterans about their war experiences,” McPhie wrote in his Eagle Scout of the Year application.

McPhie identified veterans of all wars to interview by asking family and friends, and by contacting several veterans service organization, including local American Legion posts. Over the course of two days in 2017, McPhie conducted interviews with veterans at American Family Housing’s Potter’s Lane (which provides permanent supporting housing for chronically homeless military veterans) and Newport Beach Civic Center. A luncheon was served and a POW/MIA remembrance table was provided at each location. The interviews “were truly an opportunity to thank our local veterans and listen to their stories and learn from their experiences, examples and wisdom. They were an opportunity for us to celebrate patriotism and Americanism and duty,” McPhie wrote.

McPhie is active in his community and has received numerous awards and achievements, including the 2019 Youth Community Service Award from the Irvine Rotary for creating 3D-printed prosthetic hands for children with a missing limb.

“He has been a driving force for the youth in the city of Irvine and instrumental to our efforts to encourage other students to take action in improving our society as a whole,” wrote Joseph Molina, youth service chair for Irvine Rotary. McPhie also led a service project with 50 volunteers to make over 500 sandwiches to be donated to four food pantries and homeless shelters in Orange County, and has volunteered his time to teach former homeless children computer coding.

“I would like to describe Michael as a ripple effect … he encourages and inspires others to give back,” said Elizabeth Duong, community outreach coordinator for American Family Housing.

Other achievements for McPhie include being a Junior Naturalist with the Sea & Sage Audubon Society, and an award-winning classically trained competitive pianist, having taken first place at the American Fine Arts Festival International Music Competition in November 2019. He has an upcoming solo piano debut at Carnegie Hall, and shares his musical talent at community nursing homes by providing piano performances.

The future for McPhie is a career path in math, he wrote. Last summer, he researched cancer metabolism at the University of California Irvine where he helped develop a mathematical model “to better understand this phenomenon.” The internship was an opportunity for McPhie to apply the complex math that he’s currently studying to achieve his goal of being on the USA Math Olympiad team.

“Having received so much, and being blessed to live in this land of opportunity, I hope to use applied math to find solutions that improve life for my fellow man,” McPhie wrote.

The three runners-up will each receive a $2,500 scholarship – Noah Ventura of Alexandria, Va.; James Simpson of Wayne, Neb.; and Ryan Cannon of Millburn, N.J.