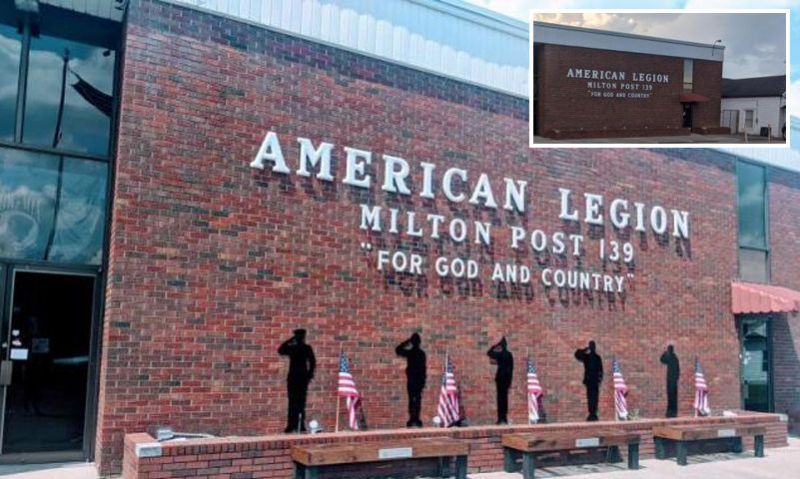 Justin Hall was in search of an Eagle Scout project around the same time his father joined American Legion Post 139 in Milton, W. Va. His father’s Legion membership prompted Justin to ask if the post needed anything. The answer led to a tribute to all five military service branches, a place of remembrance for POW/MIAs, and the completion of an Eagle Scout project.

“It feels great that I was able to do this for the veterans,” said Justin, a rising senior at Winfield High School.

The front of Post 139 is now adorned with five wooden benches with black silhouettes behind them that represent the Army, Marine Corps, Navy, Air Force and Coast Guard, as well as a POW/MIA bench with the silhouette of a rifle, helmet and boots. Individually painted in black on the service branch benches are the words “Post, 139, Post, 139, USA.” The POW/MIA bench has an engraved plaque on top.

It took 270 volunteer hours to complete the project – a result of hard work and dedication from Justin, his family and Scout troop.

“It’s a recognition of all that we have done in the military,” said Post 139 Commander Wayne Legg. “It’s an outstanding job. All the members are impressed by it.”

COVID-19 hit right when Justin was starting his project. So to remain safe and practice social distancing, his parents' living and dining room was turned into the construction site to build the benches and silhouettes. Family members helped Justin, along with members of his Scout troop, build the benches with on-hand lumber donated by Justin’s grandfather. And silhouettes were cut out of plywood after being traced from a projector.

While Justin’s mother, Susan Hall, is glad to have her living and dining room back, it was “a very minimal sacrifice compared to those that have served,” she said. “I feel the veterans, especially in this day, don’t receive recognition for their sacrifices that they make so anything that gives them recognition is amazing.”

Susan’s employer, City National Bank, replaced the flags outside the post – American, POW/MIA and West Virginia state flag – and provided mulch for the flower bed that’s behind the benches.

“I think the project turned out great,” Susan said. “We feel very, very proud of Justin. And Wayne supported all of the decisions that Justin wanted to do and was very appreciative throughout the whole process.”

Legg said the Eagle Scout project “added to the attractiveness of the post. It’s something that we can use as a selling point for new members.” Susan agrees with hopes that Justin’s project helps the post “get new members and help veterans have a community.”

A dedication ceremony will be held June 20 with Post 139 members, the Hall family, and representatives of each military branch and a MIA family.