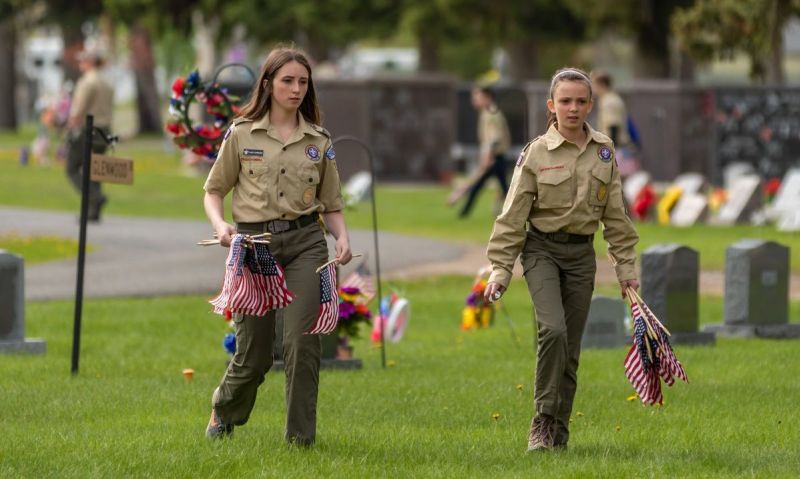 Hailey Carpenter's younger sister, Ashley, handed her a flyer that set in motion a goal and challenge. And it had to be completed in about 18 months before Hailey turned 18.

The Capital High School senior met the challenge and is now part of the inaugural class of females nationwide and in the history of Montana Boy Scouts to earn the prestigious Eagle Scout rank.

Through this journey to Eagle Scout rank “I’ve learned that I’m capable of doing a whole lot more than I thought I could before,” said Hailey, an American Legion Auxiliary member of Unit 2 in Helena. “When I started this I thought it would be almost impossible to achieve my Eagle in a year and a half. I’ve learned that I can do anything I want as long as I’m willing to sit down and give it the commitment necessary.”

Boy Scouts of America, now called Scouts BSA, opened Scouting to girls ages 11 to 17 as of Feb. 1, 2019. Hailey read articles about this never-before opportunity prior to the February date and joined a Venturing Crew “to prepare going into Boy Scouts.” She knew achieving Eagle Scout rank by accruing 21 merit badges and completing a community service project in a condensed timeline would be a difficult task. But, “I knew I just had to sit down and do whatever I could whenever I could and essentially work constantly on completing different merit badges and making sure I had all of my rank requirements done.”

Her father, Justin Carpenter, a member and past commander of American Legion Post 2, said he wasn’t surprised with his daughter’s decision she laid out ahead of herself. “She’s very tenacious in her abilities and when she sets her sights on something she goes after it.”

Instead of joining a Scouting troop, Hailey chose to be a Lone Scout. As the name implies, she had to look to leaders in her life for guidance and mentorship in fulfilling the requirements of Eagle rank. Those leaders included her father along with other Post 2 and Sons of The American Legion members who signed up to be merit badge counselors to help Hailey on her Eagle Scout journey.

“I learned so much more about all of The American Legion members that had been a part of Scouts when they were younger, or had children in Scouts, or they just supported the Scouting program,” Hailey said. “I really loved bonding with the veterans throughout my time as a Scout.”

“It’s been awesome to know that not only the veterans, but the Sons and the Auxiliary members as well have all been right there behind her 100 percent,” Justin said.

Justin added that it hasn’t just been the route of earning Eagle Scout rank that has both Hailey and Ashley involved with American Legion Post 2. The two sisters have helped Post 2 with Memorial Day ceremonies, highway cleanup and “just other events that we hold these girls are always right in the thick of things.” Hailey too has spent hundreds of hours volunteering at the local VA hospital prior to joining Scouts. However, it has “been great to watch my two girls bond and grow closer together as they work their way through the (Scout) ranks” as Ashley too is in the process of meeting Eagle Scout requirements.

Erin, the officer manager at the American Legion Department of Montana headquarters, agrees that through Scouting “it’s been rewarding to see their bond and awareness of their own abilities and their leadership grow.” She shared that Ashely used to be “shy and timid but now she is the first one to stand up and lead the way.” And that while Hailey has “always been outspoken now has a bigger confidence about her when she needs to lead.”

With both of his daughters in Scouting, Justin said he hopes that “it shows girls who may be a little timid that they can do it, to go ahead and jump into it and to start to challenge themselves and to learn as much as they can through those merit badges. What I like about (Scouting) is the specific merit badges that the girls get to earn about your own community, state and nation which is right there in line with The American Legion and its Americanism pillar.”

Hailey exceeded the 21 merit badge requirement – earning 36 – and was approved for the rank of Eagle Scout by the Scouts board of review on Sept. 13. Now, her plans are to continue helping her sister achieve Eagle rank and get a girls Scout troop started. “I would be taking on a mentoring position with the girls and teaching them leadership skills and different things that would have been helpful to me and my sister when we started,” Hailey said. Then following high school graduation in May 2021, Hailey plans to attend college and pursue a career in nursing. “Through my time in Scouts and the different first aid badges, it’s shown me my passion for helping others.”