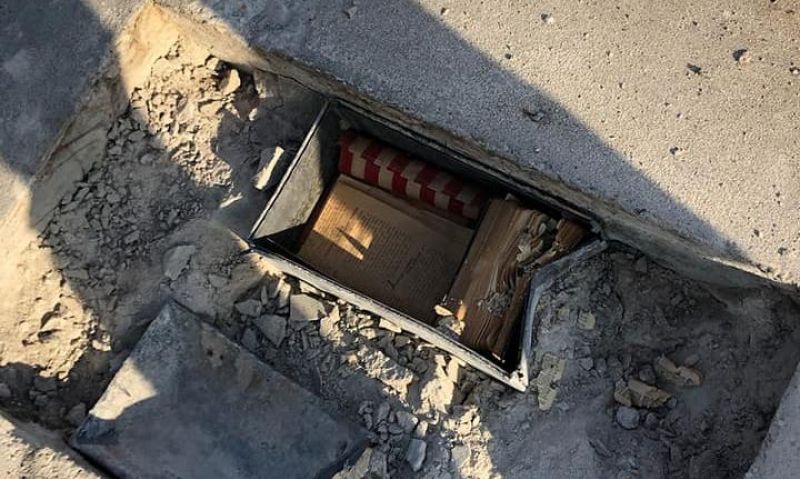 What started as an Eagle Scout project at American Legion William Lee Netzer Post 23 in Sanger, Calif., turned into the finding of a historical treasure trove.

Christian Gonzalez, a senior at Sanger High School and a member of Scout Troop 223 (St. Anthony of Padua), contacted me to propose an Eagle Scout project. It was a beautification project that would conform to water conservation measures in California, as well as install a pedestal with a bronze plaque in front of the flag pole.

Christian, son of Post 23 member Lt. Col. Cesar Gonzalez with the 144th Fighter Squadron in Fresno, Calif., was jackhammering concrete around the flag pole when he noticed a metal box. Thinking it might be an electrical box he stopped and began chipping away with a hammer. What he found was a shocking surprise to him and members of American Legion Post 23 – a time capsule from June 14,1923 when the post was chartered.

Inside the time capsule was a:

- Bible with the name Eugene Bradford inside the front cover; he was listed as the post adjutant on the charter roster. The Bible marker was on John 3:16, one of the most quoted verses in the Bible: "For God so loved the world that he gave his one and only Son, that whoever believes in him shall not perish but have eternal life."

- Charter membership roster. The roster included the name of Frank Netzer, who is believed to be related to William Netzer whom the post is named after.

- Roster of what is believed to be the Auxiliary unit.

- Photo of a young soldier kneeling next to a tent, believed to be possibly from World War I.

Post 23 will be looking for a way to preserve this piece of history and possibly find family members alive today of the Bible, charter members and the soldier in the photo.

To bring this finding full circle, Post 23 decided to fill the time capsule with a bit of modern treasures. The 2020 time capsule features a:

- Bible donated by Post 23 Chris Conway that he received at basic training prior to leaving for Vietnam, where he too had underlined John 3:16.

- 2017 issue of The American Legion Magazine. On the cover is then American Legion National Commander Charles Schmidt with President Trump as he signed the VA Appeals Modernization Act on stage during the National Convention in Reno, Nev.

And nothing in 2020 would be complete without a mask, a few sheets of toilet paper, and a bottle of hand sanitizer. We do have a sense of humor, because hey, it describes this year fairly well. All items were wrapped in plastic prior to being placed in the time capsule to help preserve their integrity. The time capsule was resealed and the concrete was poured to encapsulate it.

Post 23 would like to extend our thanks to Christian for all of his hard work and congratulate him for the historical treasure find.