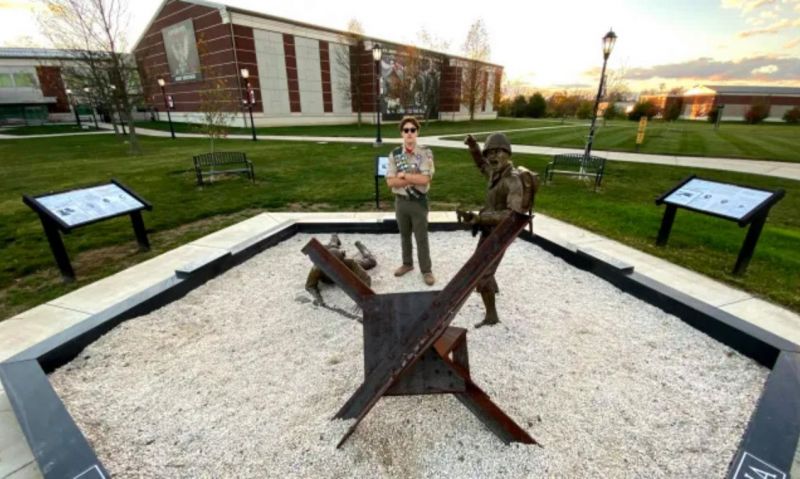 The committee also selected three runners-up who will each receive a $2,500 scholarship – Jackson Mills of Mt. Vernon, Ill.; Charlotte Beatson of Littleton, Colo.; and Matthew Korf of Woodbury, Minn.

Adam, a senior at Trinity High School and member of Troop 88, was nominated for the National Eagle Scout of the Year award by American Legion Post 109 in Mechanicsburg.

For his Eagle Scout project, Adam designed and constructed a World War II D-Day memorial called Liberation Pointe to “honor the sacrifices of D-Day and WWII veterans,” he wrote, “and to make sure that America's future generations do not forget what these men and women did for our country and for the world.”

Liberation Pointe memorial is located on the grounds of the U.S. Army Heritage and Education Center in Carlisle, Pa. The project took over two years to complete with 2,385 hours of volunteer work and more $42,000 raised, as well as donations from a wide range of vendors that resulted in the project valued at over $200,000.

Adam unveiled his Eagle Scout project on Veterans Day 2019, the 75th anniversary of D-Day, with 400 people in attendance, including 24 World War II veterans. The veterans were invited to pour sand from each of the five D-Day invasion beaches that Adam had collected during his travels to Normandy, France.

-      Two life-size bronze statues that represent American soldiers landing on Omaha Beach and a life-size steel hedgehog anti-tank obstacle weighing over 600 pounds. The statues and hedgehog are enclosed inside a pentagon border made of Pennsylvania Black Granite. Each of the five sides represent the five D-Day invasion beaches: Omaha, Utah, Gold, Sword and Juno.

-      Seven informational panels surround Liberation Pointe – five of the panels give summary to each of the beaches including the troops and units that fought there along with personal accounts from American servicemembers who fought on D-Day that Adam interviewed. The other two panels explain Operation Overload.

-      Four trees that surround the memorial symbolize the four main countries that were involved in the invasion: America, Great Britain, France and Canada.

“I believe I achieved my goal of educating my generation, and many other Americans, about what D-Day and World War II,” Adam wrote. “Working on my Eagle Scout project has taught me four very important life lessons. First, when you commit to something, make it a ‘failure is not an option’ endeavor, learn to pivot and have back up plans constantly ready. Second, hard work has to become the standard if you want to succeed. Third, put integrity in your work and require integrity from those you work with. Lastly, lead by example.”

Kyle Mundis, an Eagle Scout coach for Adam, emphasized that the Eagle Scout project “was not easy. Christopher should feel very proud of himself for accomplishing this project,” he said. “Christopher overcame countless trials and challenges in accomplishing this project, a real testimonial to the character of this young man. Whether the task was polishing the granite after school or organizing the workdays that lead to the spreading the stone and tan bark, assembling the benches or planting of the trees, Christopher saw the project through.”

Adam’s dream is to become a pilot and is looking at attending either the U.S. Air Force Academy or the Naval Academy.

“Christopher represents the kind of individual that we hope will lead our military and The American Legion in future years. We are proud of Chris and are honored to call Chris, our friend,” said Richard Adams and Michael Neff, both past commanders of Post 109.