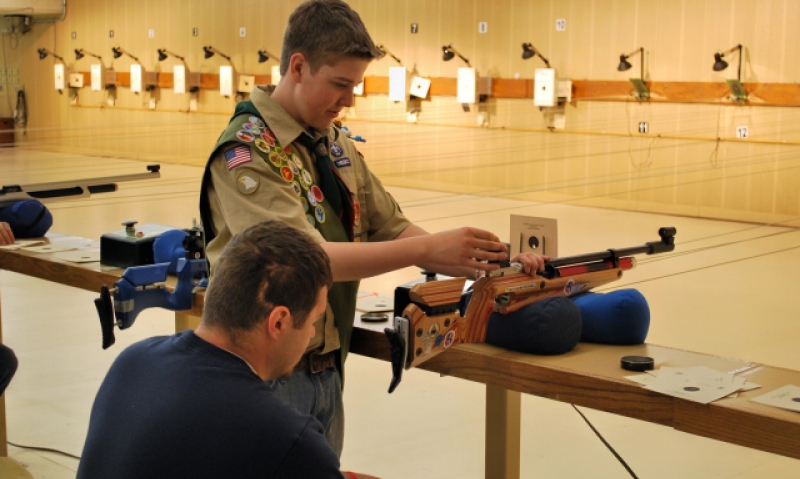 Tim Sherry has been involved in shooting since he was seven years old. (Photo courtesy Tim Sherry)

For his Eagle Scout project, Tim Sherry thought outside of the box.

The 15-year-old Boy Scout didn't build a bench or refurbish a church. Instead, he found a way to bring his favorite sport - professional shooting - to impaired veterans.

"I helped coach at a 2005 Paralympic shooting event, and I've always thought about just how fun it was and the looks the shooters had in their eyes," says Sherry, who participates in American Legion Junior Shooting Sports.

So he organized an event in his home state of Colorado to teach shooting to injured and disabled veterans. Shooting relies more on concentration and focus than bodily function, making it ideal for those with service-related impairments, he says.

He coordinated a one-day outing to teach rifle shooting to a handful of disabled veterans, who served in Iraq and even Patton's Army. The event included a short competition that gave participants a taste of professional shooting. A few shooters enjoyed the sport so much they began practicing with the junior Olympic team in Colorado Springs.

"My whole goal was that they enjoy themselves, and get one or two of them maybe into shooting," Sherry said. "It would give them something to get out of bed in the morning for."

The project did hit a couple of snags early on. Because of privacy concerns, VA couldn't give Sherry information about impaired veterans. So the amateur shooter contacted a U.S. Olympic Committee liaison, who put him in contact with a Warrior Transition Unit in Fort Carson that sent a few participants.

Funding was another obstacle. Initially, Sherry struggled to raise money for the project, but Launa Stiles - a widow of an a servicemember killed in Iraq - contributed $800 in gift cards to honor her husband's memory. Sherry used them to purchase equipment and fly in Josh Olson, a former Army staff sergeant who returned from Iraq in 2003 and has become a success in Paralympic shooting. Olson, who lost his right leg during his deployment, acted as a counselor for the event.

"He showed them what it's like and what you can do with the sport," Sherry said.

"It's something for them to do," Sherry said. "Basically, they have something that inspires them to get up and go to the range every day."