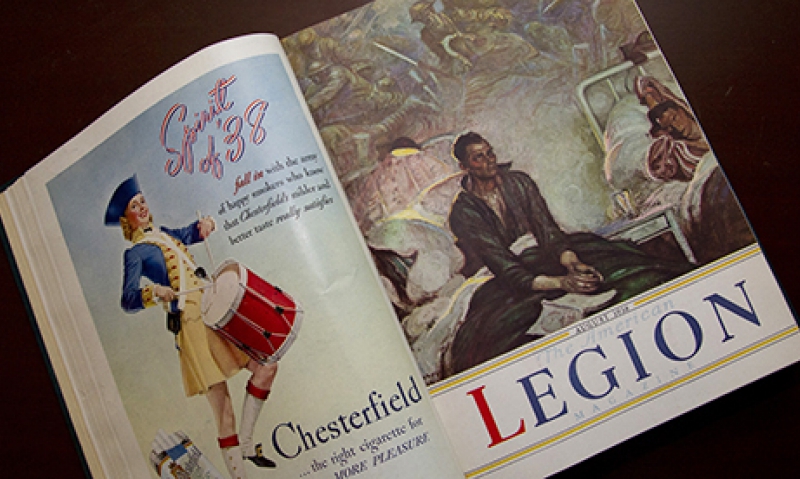 The American Legion Magazine's August 1938 cover was one of the first depictions of post combat stress in a popular publication. Photo by Craig Roberts

Civil War field surgeons called it Soldier's Heart, a condition marked by shortness of breath, heavy perspiration, chest pain and heart palpitations. Yet, when the combat soldiers it afflicted were examined, no signs of cardiac disease could be found. Soldier's Heart, it was noted, was often accompanied by fatigue, slowed reaction times, mental disconnection from surroundings, confusion, indecision and an inability to prioritize. That syndrome was quaintly known as "nostalgia".

In World War I, Soldier's Heart and "nostalgia" were dubbed "shell shock" and recognized as either a wound or an illness, depending upon whether or not the symptoms were triggered directly by enemy fire (like an artillery shell dropping into one's immediate neighborhood) or simply by the rigors of duty in trench warfare (during which, statistically, a combatant's chances of escaping alive or at least in one piece were less than 50-50). In the British Army, if a soldier was "wounded" and suffered shell shock, he got a "wound stripe" to display on his uniform and was rewarded with a modest government pension. If he was ill because of general stress, the hapless Tommy was told to keep his chin up and get back in the fray.

Shell shock got a more formal name in World War II: "battle fatigue." This term persisted through the Korean War. By the time the Vietnam War ended, battle fatigue had morphed into the less idiomatic, more medically appropriate and more seriously-taken post-traumatic stress disorder, or PTSD.

Except for the occasional, political correctness-driven dropping of "disorder" from the name, PTSD is still the term used to describe the long-term effects of combat stress. It is the "invisible wound of war" mentioned with increasing frequency by journalists and politicians and treated with ever more seriousness and sensitivity by caretakers of wounded warriors.

Those who have never experienced combat or the relentless threat to life and safety that is duty in a war zone have a difficult time comprehending and dealing with the depression, excessive irritability, survivor's guilt, recurrent nightmares, flashbacks and overly sensitive startle responses that plague those with PTSD.

In an attempt to promote public understanding of PTSD, Congress last year designated today, June 27, as National PTSD Awareness Day. The American Legion encourages members to help increase awareness of PTSD and its devastating, sometimes life-taking, consequences by informing employers, workmates, neighbors, friends and relatives of the realities of PTSD. Not only does the public need to be informed of the condition's seriousness, but also of the promising research into and treatments for PTSD. The better the public understands PTSD, the more effective will be the community support given to those afflicted by it and the less will be the stigma attached to it.

The Department of Veterans Affairs is maintaining a web page devoted to PTSD Awareness Day here.