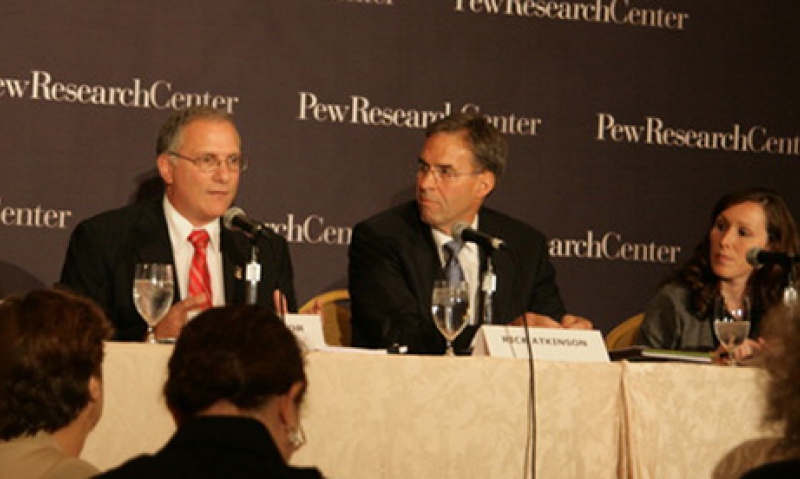 American Legion National Commander Fang A. Wong attended a panel discussion on Oct. 5 in Washington that focused on key findings of a Pew Research Center study, "War and Sacrifice in the Post-9/11 Era." The study was based on surveys of 2,003 civilian adults and 1,853 veterans - including 712 who have served since 9/11.

The results of the study - which focused on the attitudes of veterans and the general public toward military service, the wars in Iraq and Afghanistan, and how Americans are sharing the burdens of a wartime era - didn't come as a surprise to Wong.

Noting that America has sustained a decade of warfare with about one-half percent of its population serving in the military, the study found that about 84 percent of post-9/11 veterans feel the public does not understand problems faced by servicemembers and their families; 71 percent of the public agree.

"There is nothing really surprising or unusual about the results of the study," Wong said. "As a matter of fact, they seem to be an accurate reflection of what we already know. We just didn't have the percentages. With the Legion's involvement in women veterans issues, strategy in Afghanistan and best practices for treating TBI and PTS, we half-expected some of these results already."

The study covered a variety of issues, including sacrifices and burdens created by the global war on terrorism, efficiency of the U.S. military, and how well the civilian community understands military experience.

While 83 percent of the public believe that servicemembers and their families have made many sacrifices since the 9/11 attacks, 70 percent of them also feel that such sacrifices are "just part of being in the military."

"The panelists talked about the gap between servicemembers who are making wartime sacrifices and civilians who are enjoying the benefits of those sacrifices," Wong said. "We always talk about this anyway and present it in our testimony to Congress. Only one-half of 1 percent of Americans are fighting overseas - defending national security for the rest of us."

Panelists for the "War and Sacrifice" discussion included moderator Rick Atkinson, a Pulitzer Prize-winning journalist and author; retired Army Col. Charles Allen; Vivian Greentree, director of research and policy for Blue Star Families; Peter Mansoor, chair of military history at Ohio State University; and David Segal, director of the Center for Research on Military Organization at the University of Maryland.

During the panel discussion, Wong said the point was made that civilians may not risk their lives, but they are also making sacrifices. "Civilians are the ones footing most of the bill for our wars and for veterans benefits when they come back, and everything else associated with the war effort," Wong said. "Whether we think that's enough of a sacrifice is open to debate, but every American is affected, is impacted to a degree by the wars we fight."

Wong said one idea brought up during discussion was that the gap of understanding between civilians and the military may be the result of America no longer having a draft, so not as many people have direct contact with our troops.

Mansoor, noted that America has used a military draft for only a few years in its entire history. But because we used a draft during the Vietnam War era, Americans got used to the idea in recent decades. Yet the draft model is not typical in U.S. military history. Mansoor served as Gen. David Petraeus' executive officer in Iraq.

"So what we've done with our all-volunteer force is to actually return to the vision of our founding fathers - that our military would not be a force of conscripts," Wong said.Over the past 20 years, the Pew study says, the profile of America's military forces has shifted. Those serving today are older, better educated and more likely to be married; more women and minorities are in uniform. Deployments have increased in frequency and duration; 38 percent of post-9/11 veterans say they have deployed overseas three times or more.

Despite the increased operational strain on the U.S. military, 82 percent of those who have served since 9/11 oppose bringing back the draft; 74 percent of the public agrees that the Selective Service System should not be used to conscript civilians into the Armed Forces.

For a summary of the study's key findings, click here.