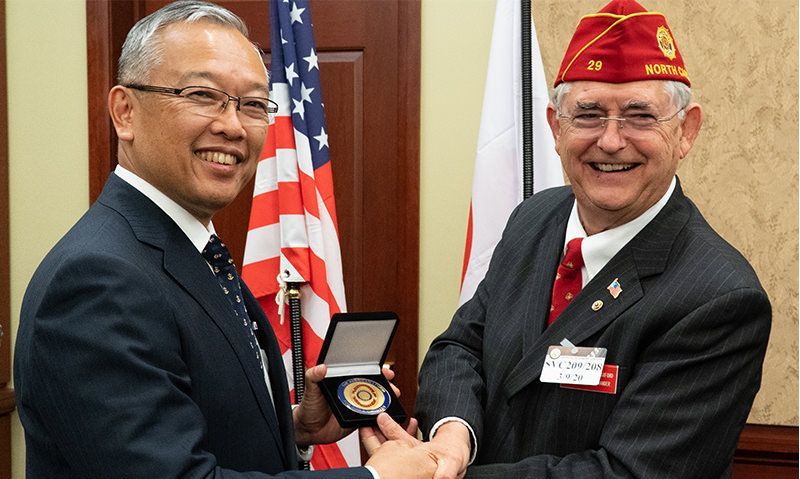 Sixty years later, on March 9, The American Legion and the Japanese Embassy came together to honor the anniversary of the treaty, while at the same time sharing how military service impacts the families of those serving.

Gathering at the U.S. Capitol Visitors Center, U.S. and Japanese military veterans and their spouses took part in the “Friends and Partners: The Diamond Jubilee of the U.S.-Japan Alliance” panel that focused on the challenges faced by military families. One the panel was former U.S. Army Chief of Staff Gen. George Casey Jr. and his wife Sheila Casey, and former Chief of Staff for the Japan Maritime Self-Defense Force Adm. Yutaka Murakawa and his wife Noriko Murakawa.

The panel was moderated by Kathy Roth-Douquet, the CEO of Blue Star Families, the largest chapter-based nonprofit organization serving active duty of all branches, Guard and Reserve, wounded, and transitioning veterans and their families.

Roth-Douquet said that his organization believes that “in the 21st century, supporting our troops means supporting military families," noting stressors on military families includes those related to finances, feelings of isolation and the difficulties of being separated during deployments.

Noriko Murakawa, who served as the Chairwoman of the Association for Spouses of Executives of the Japan Maritime Self-Defense from 2016 to 2019, said through a translator that having to move around frequently was difficult, and when he was younger her husband often had to go to work right after the move. “Oftentimes he was not there for us when we moved in the furniture,” she said. “It was hard not having him around as we settled into our new home."

George Casey – who served 41 years in the Army, including as Chief of Staff from 2007-2011 – was born into a military family. “As an Army brat, I’ve been a member of the military my entire life,” he said. “There are inconveniences. But there are, in fact, serious challenges, and my family experienced both.

“Inconveniences are like I went to four high schools in three different countries. That was a lot of moving around, but I had a very strengthening experience. The separations are more than an inconvenience.”

Casey’s father, George Sr., was a general and in command of the 1st Cavalry Division in Vietnam when he died in 1970 in a helicopter crash in South Vietnam. George remembered driving his father to the airport for what would be his last tour in Vietnam. Casey remembered his mother having tears in her eyes as her husband left.

“I looked at my mother and I said, ‘You’ve been doing this your whole marriage. It must get easier,’” Casey said. “And with tears in her eyes, she looked at me and said, ‘No dear, it only gets harder.’"

Sheila Casey, the current Chief Operation Officer of The Hill, said her family moved 25 times during George’s military career. “With each of those moves early on, it’s finding a place to live, finding schools for your children … relocating your job and hoping you can find one comparable or better,” she said. “Moving can be stressful, but it also opens up the door to new adventures.”

Early on, Sheila said, there were many separations for short periods of time. But when her husband served as the senior coalition commander in Iraq from June 2004 to February 2007, the separation was almost three years.

“When he first left for Iraq he was supposed to be gone for a year,” Sheila said. “I was not looking down the barrel of 32 months. With those separations, in some instances there can be an isolation as well. When George went to Iraq for 32 months, I was the only one on the base where I lived on whose husband was gone.

“But the things I learned early on … is that you learn to depend on your friends around you, and how that group unites and becomes a family.”

Through a translator, Yutaka Murakawa – who served as the 33rd Chief of Staff for the Japan Maritime Self-Defense Force from 2016 to 2019 – said moving around regularly could be burdensome, but “it was wonderful to gain rich experience through living in different places. My wife and I will never forget our interactions (in different locations).”

Noriko Murakawa said she remembers a time when military service in Japan was considered dishonorable. She even remembered asking Yutaka shortly after they first met why he prepared for war and trained to kill.

“He answered, ‘Nobody wants war. War is the worst date of the world, and somebody has to be ready for the worst,'” Noriko said. “At that time it was all clear to me. That was something nobody taught me in school.”

George Casey said that despite the moving and separations, “aside from having my dad around for longer, I wouldn’t have changed a minute of it. I feel like as a family we grew significantly.”

Sheila said that in being part of a military family, you don’t think of the challenges on a daily basis. “But as I look back and think about the people we served with, the friends that we made and the friends that we still have – the fact that you really are a part of an organization that is bigger than yourself,” she said. “It’s filled with people who really are working as a team. It’s not about yourself. It’s about the collective. I think I’m most proud … that I was a part of that group.”

A reception followed the roundtable and was attended by Japanese ambassador to the United States Shinsuke J. Sugiyama, as well as members of Congress that included Rep. Mark Takano, the chairman of the House Committee on Veterans’ Affairs; and Sen. Angus King, who sits on the Senate Committee on Armed Services.

Takano said the relationship between Japan and the United States is “deeply personal” to him because his great uncles served in the 442nd Regiment in World War II. The unit was composed almost entirely of second-generation American soldiers of Japanese ancestry and is the most decorated unit in U.S. military history.

“In the decades since World War II, the United States and Japan have come together to forge a better and brighter future for the citizens of both our countries,” Takano said. “Our partnership should serve as a model to the world that when shells, ships and planes’ roar have fallen silent, economic trade, cultural exchanges and a shared vision for our peoples creates an unbreakable bond.”

“If you look at world politics, one of the things that distinguishes us from the Chinese and the Russians is allies. They have clients, but they don’t have allies. We have allies, bound together with bonds of friendship and mutual interests.”

American Legion National Commander Bill Oxford attended both the panel and the reception, and while doing so referenced the “special relationship” the United States has with Japan, referring to it as “an alliance that has been called a gold standard of defense treaties. But it’s more than just an alliance. It’s a tried-and-true friendship.”