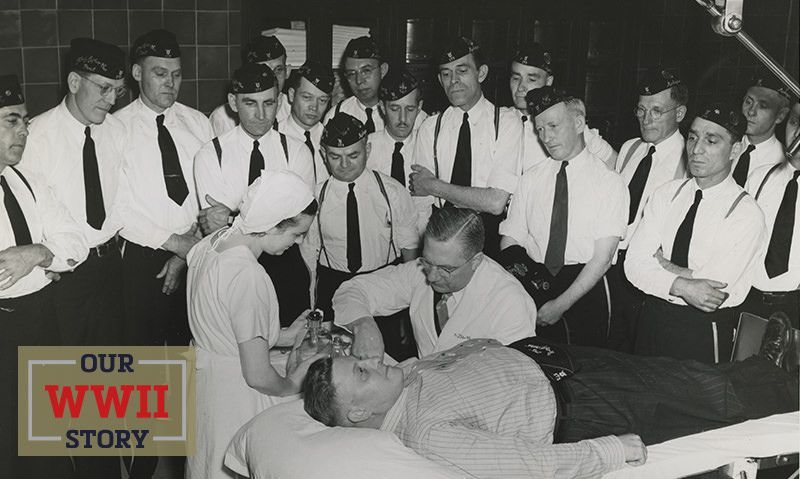 On Dec. 9, 1941, two days after Pearl Harbor was bombed sending the nation into the Second World War, The American Legion’s Defense Committee was already at work in Washington preparing the organization for urgent military and home-front support. Three new national committees – Naval Affairs, Merchant Marine and Civil Defense – were assembled under the direction of the parent committee, headed by future National Commander Warren Atherton of California, who two years later would lead the Legion’s massive effort to draft and pass the GI Bill.

“The stab in the back at Pearl Harbor on Dec. 7, 1941, has necessitated revision and expansion of The American Legion National Defense plans, to the same proportionate extent that that catastrophe has changed the national program and the pattern of our daily lives,” Atherton reported of the Defense Committee’s challenge, in April 1942.

By then, the organization of World War I veterans had rapidly set in motion dozens of civil defense initiatives, including rapid mobilization of Legionnaires to serve as local air-raid wardens, at the request of President Franklin D. Roosevelt. Also emerging from that time was an initiative as relevant today as it was during World War II: the American Legion National Blood Donor Program.

By May 1, 1942, posts worldwide were collecting blood for the American Red Cross to cover growing needs for plasma not only on the war fronts but at home, as well, to include military and VA hospitals. “The supply of blood plasma has been greatly increased by Legion donors and Legion campaigns for blood donations,” Atherton told the organization’s National Executive Committee in May 1942.

As a priority, blood donation center support was listed first among six resolutions presented to the NEC that originated in the new Civil Defense Committee. It passed as follows:

Whereas, The Army and Navy have requested 380,000 pints of blood by July 1 and 900,000 in the next 12 months; there is also great need for plasma in civilian defense plants and service;

Resolved, That The American Legion deems it is an advisable and essential part of civilian defense that there be a wide expansion of the blood donor program and further establishment of blood bank centers, making such facilities available within each state in the Union; and it is urgently recommended that appropriate steps be taken to accomplish this end.

By the winter of 1942-43, The American Legion was making a point to be first in line, en masse, in their caps and uniforms, to give blood. “I heartily recommend giving blood for your fighting men as a No. 1 Legion activity, for the duration,” Richmond, Va., Post 1 Commander William T. Luck said that winter after 240 members of his post “filled the charts” in a two-day drive at the Medical College of Virginia.

In time, The American Legion would grow to become the No. 1 organizational donor of blood to the Red Cross, annually producing between 80,000 and 100,000 units nationwide.

The NEC passed a resolution in May 1967 designating the week of Dec. 7 each year as “National American Legion Blood Donor Week,” in remembrance of the attack that sent the nation into World War II and gave birth to the program.

An annual month-long joint American Legion-Red Cross Holiday Blood Drive also kicked off in 1967, at the height of the Vietnam War, generally to begin Dec. 7 and conclude a month later. The following year, promoting the Holiday Blood Drive, National Commander William C. Doyle described it this way: “no finer gesture could be made by Legionnaires and Auxiliary members than a donation of their blood during this critical period."

In 1985, the NEC passed a resolution to recognize departments and posts that produced the most blood in a year’s time. The National Commander’s Blood Donor Award program continues today.

At various times – during spans of heightened need like World War II, the Vietnam War, 9/11 and the coronavirus pandemic of 2020 – American Legion members and posts have far exceeded goals for blood donations. A late-April 2020 drive by members of Battle Creek, Mich., Post 257 produced, for instance, 126 percent of the Red Cross goal.

“Wow, we don't typically see blood drives that collect over 100 percent,” said Loretta McCarthy, territory account manager for the American Red Cross in Michigan. “Amazing, especially during these unusual and restrictive times … so pleased with the volunteers, the building, the donors … it was a wonderful day for all.”

Amazing as the response may have been in recent months, the willingness and ability of the American Legion Family to step up and donate above and beyond expectations is no deviation from the history of a blood-donation program that was born of an emergency that occurred on Dec. 7, 1941, and was followed by a call to action that has continuously been met for nearly 80 years.