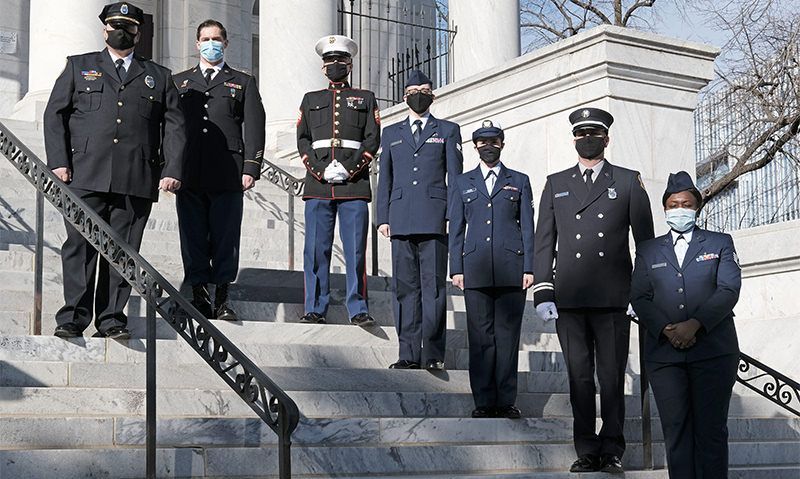 These honors are awarded to those who have selflessly distinguished themselves over and above their normal duties predominately through community service activities and professional achievement. These awards are typically presented during The American Legion’s National Convention by a Medal of Honor recipient.

Since the pandemic canceled the national convention, this ceremony paid tribute to the honorees.

“This award is so significant,” said National Security Commission Chairman Steven A. Brennan, who presented the awards during Thursday’s ceremony. “To me, these are most significant awards in The American Legion. Your names will forever be written in the book of excellence.”

Spirit of Service recipients are nominated and chosen by their branch of service for their community service efforts.

“For the Spirit of Service awards, it embodies their branch of service and core values,” said Brennan. “Not only are they serving their military with pride, but in their free time, they are dedicating massive amounts of time to do things for their community.”

This year’s recipients are:

• Specialist Matthew J. Turley, U.S. Army. A member of the 4th Psychological Operations Group (Airborne), Spc. Turley volunteers with the Ministries and during Hurricane Dorian. He has devoted more than 600 hours to volunteer service.

• Staff Sergeant Amy-Christy Amakihe, U.S. Air Force. Amakihe is a Flight Operational Medical Technician with the 108th Wing, New Jersey Air National Guard. She volunteers her time with Ignite, a nonprofit dedicated to igniting the spark in students and commitment to higher education.

• Sgr. Ryan N. Berney, Firefighter of the Year. Berney is the lead firefighter for Offutt Air Force Base, Nebraska Fire and Emergency Services. Berney is currently a reservist in the U.S. Army and served during Operation Iraq Freedom where he deployed to Balad, Iraq, in 2003.

• Lt. Robert Berg Jr., Law Enforcement Officer of the Year. Berg currently serves in Village of DeForest Police Department in Wisconsin. A veteran of the U.S. Army, Berg is a distinguished member of the police force who exemplifies “America’s Finest” by singlehandedly organizing food and clothing drives for veterans in need, working with the American Red Cross to provide relief during Hurricane Dorian and continues to coach and mentor DeForest-area youth.