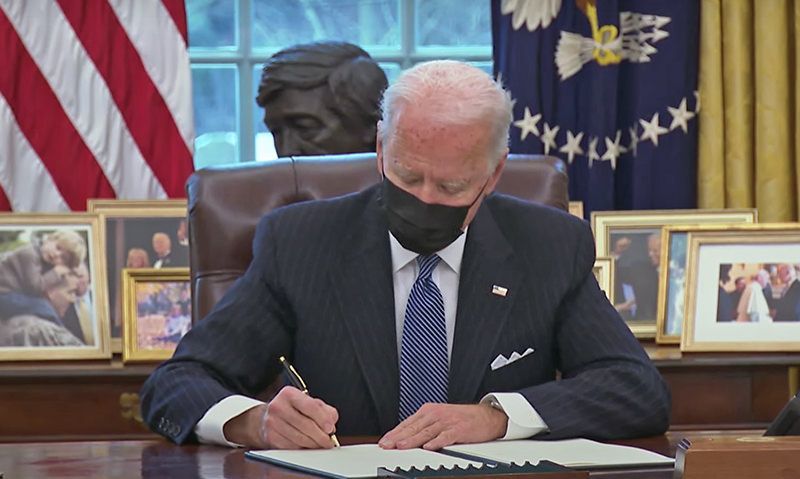 President Biden lifted the Pentagon’s ban that kept transgender people from serving openly in the U.S. Armed Forces in an executive order Jan. 25. The president was joined in the Oval Office for the signing by Defense Secretary Lloyd Austin and Chairman of the Joint Chiefs of Staff Gen. Mark Milley.

“The all-volunteer force thrives when it is composed of diverse Americans who can meet the rigorous standards for military service, and an inclusive military strengthens our national security,” stated the order.

The executive order will immediately prohibit involuntary separations and denials of continuation of service due to gender identity; identify and examine the records of those who have been involuntarily separated or denied a continuation of service on the basis of gender identity; and orders the Secretary of Defense and the Secretary of Homeland Security to begin the process of allowing transgender servicemembers to serve openly.

“It is my conviction as Commander in Chief of the Armed Forces that gender identity should not be a bar to military service,” Biden’s order read.

Former President Donald Trump ordered the ban in 2017, though it was blocked by federal courts before proceeding to the U.S. Supreme Court. In January 2019, the court voted 5-4, allowing the ban to proceed.

During his confirmation hearing last week, Austin told lawmakers he supported the initiative to end the previous administration’s ban.

"If you're fit and you're qualified to serve, and you can maintain the standards, you should be allowed to serve," he said.

In a statement released Monday, Austin reiterated his support of the executive order and committed to ensuring those who are serving and wish to serve in the U.S. military will be able to do so without fear of discrimination.

"This is the right thing to do," he said in his statement. "It is also the smart thing to do."

Austin said he will be working with senior civilian and military leadership within the Defense Department to develop the appropriate policies and procedures in order to implement the changes.

“I believe we accomplish that mission more effectively when we represent all our fellow citizens,” he said. “I also believe we should avail ourselves of the best possible talent in our population, regardless of gender identity. We would be rendering ourselves less fit to the task if we excluded from our ranks people who meet our standards and who have the skills and the devotion to serve in uniform.”