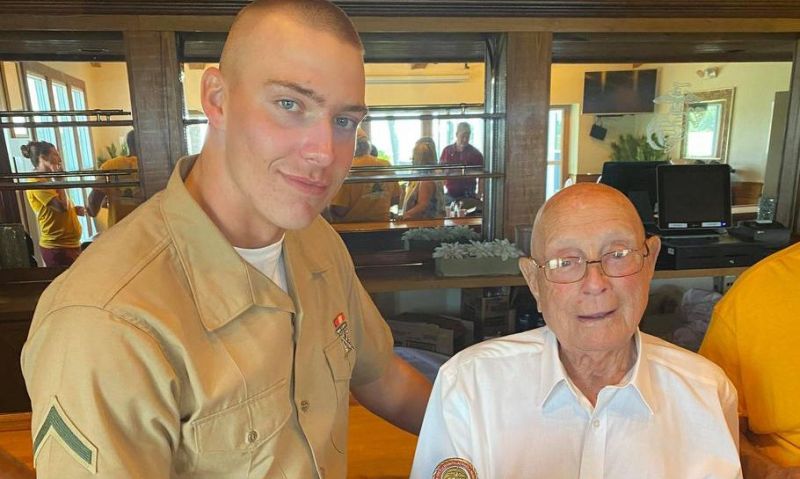 Cedar Ross got a word of advice before Marine Corps boot camp from a family member who knows a thing or two about the service himself.

His great-grandfather is Hershel “Woody” Williams, 97, the last living Medal of Honor recipient from World War II and a retired chief warrant officer.

“The only advice I think I gave him was to do the very best that he could and then do a little more,” Williams said in a CBS Evening News interview.

Going “above and beyond the call of duty” at the risk of his own life earned Williams the country’s highest medal for combat bravery during the Battle of Iwo Jima in 1945, while he was serving with the 3rd Marine Division.

Marine tanks were maneuvering in vain to clear a path for the infantry through a network of reinforced concrete pillboxes when Williams, then a corporal, volunteered his services, the award citation says.

“Covered by only 4 riflemen, he fought desperately for 4 hours under terrific enemy small-arms fire and repeatedly returned to his own lines to prepare demolition charges and obtain serviced flamethrowers,” it says.

He struggled back, “frequently to the rear of hostile emplacements,” to wipe out seven machine guns, one-by-one.

At one point, he mounted a pillbox and inserted the nozzle of his flamethrower through an air vent, “killing the occupants and silencing the gun.”

At another point, he charged Japanese riflemen who tried to stop him with bayonets and “destroyed them with a burst of flame from his weapon.”

Williams is the namesake of the expeditionary sea base USS Hershel “Woody” Williams, currently deployed to the U.S. 6th Fleet to support operations in Europe and Africa.

Ross was about halfway through boot camp before his drill instructors realized he was the descendent of the legendary Marine, CBS News reported.

“The chief drill instructor told me, ‘Ross, you’re going to have big shoes to fill,’” Ross said in an interview seated beside his great-grandfather. “I said, ‘Yes, sir. Thankfully, I wear size 15.’”

Williams laughed. Last week, he visited Parris Island, S.C., to watch his great-grandson and some 350 other new Marines cross the parade deck during a boot camp graduation ceremony.

For his efforts during the rigorous 13-week training, Ross earned a meritorious promotion to private first class, a program for the event indicated.

Friday’s ceremony was the first that family members were allowed to attend in-person since the COVID-19 pandemic began, and Williams was decked out in his dress blues to honor the newest Marines.

“They have said by their taking that oath, ‘You may take my life, but you cannot take my country or my freedom,” Williams said.

Addressing the graduating Marines, Lt. Col. Robert M. Groceman, commanding officer of the 2nd Recruit Training Battalion, told them to take pride in themselves, their uniforms and their accomplishments Friday.