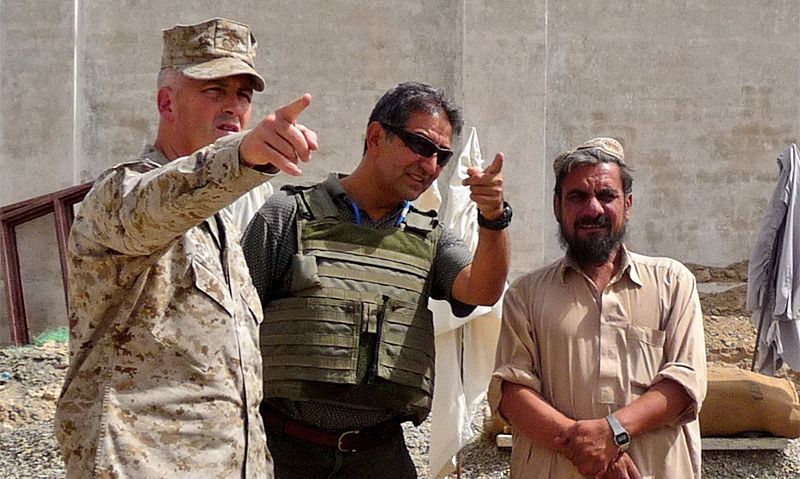 Atiqualla Rahin, U.S. Marine Chief Warrant Officer Bruce Johnson and an Afghan contractor walk around the grounds of a new building site for a men's detention facility in Lashkar Gah.

The Biden administration is preparing to relocate approximately 18,000 Afghan interpreters, drivers and others who worked with U.S. forces to other countries in an effort to keep them safe while they apply for visas, according to a report by The New York Times.

It’s a solution to a potential crisis that The American Legion strongly advocated for, as recently as last week.

“We made the case; they acted,” American Legion National Commander Bill Oxford said. “We applaud the Biden administration for working to provide a safe haven for these Afghan allies who played critical roles in our mission.”

The situation is at a critical juncture now with U.S. troops expected to withdraw from Afghanistan before Sept. 11 after 20 years of war. The American Legion, bipartisan members of Congress and military officials are concerned that Afghan allies will be targeted in revenge attacks by the Taliban. On Wednesday, administration officials said the Afghans would be moved out of Afghanistan to undetermined third countries to await the processing of their visa requests to the United States.

"The current SIV process will not work, as it takes an average of 800-plus days, and we have less than 100," Brennan said at the news conference. "The American Legion strongly encourages the U.S. government to prioritize the protection of our allies and their families by creating and implementing an immediate plan to extract these heroes. Not honoring our promises creates an enormous national security risk in the future because other countries will be unwilling to help us.”