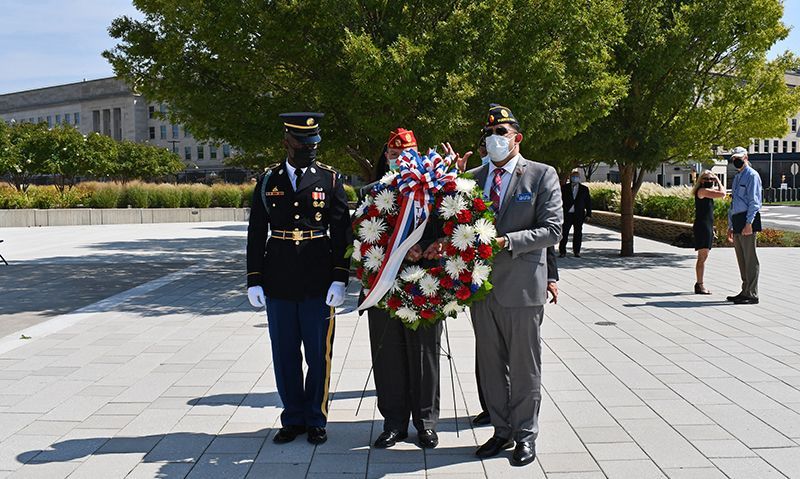 Past National Commander Richard Santos, who was evacuated from the U.S. Capitol on Sept. 11, 2001, as he was preparing to deliver testimony, lays a wreath at the Pentagon in remembrance of the 20th anniversary of the terrorist attacks.

American Legion Past National Commander Richard Santos returned to the Washington, D.C., area on Sept. 8 to lay a wreath honoring the 184 lives lost at the Pentagon during the terrorist attack on Sept. 11, 2001. On that day, Santos was the newly elected American Legion national commander who was on Capitol Hill to testify before Congress that morning.

“Having the opportunity to return to the Pentagon 20 years after 9/11 and lay this wreath for these victims is an honor,” he said.

Around 9 a.m. on 9/11, Santos was at a breakfast with other Legionnaires when they saw on television that a plane had hit one of the World Trade Center Twin Towers in New York City. At the time, many still believed it was nothing more than a tragic accident. By 10 a.m. when the then-national commander was due to testify, both Twin Towers and the Pentagon had been struck when a group of terrorists turned passenger airplanes into missiles.

“Everything changed then,” he said.

Santos said at that time, they were still unaware the Pentagon had been struck, but they heard a boom and could see the smoke billowing into the sky. Unbeknownst to him at the time, his youngest son — a volunteer firefighter in Maryland — had been called to the Pentagon.

“There was still a sense of calm,” Santos said. “It was very surreal.”

In the days following the attacks, Santos penned a statement that rings true today, especially with the conclusion of the war in Afghanistan being fresh and raw for so many.

“America continues to heal and it is our responsibility as veterans to tend to the wounds,” he wrote. “Some will panic about the future; we must reassure them. Some will weep over a lost family member or friend; we must hold their hands. Some will be angry; we must temper their rage.”

Santos recently appeared on The American Legion’s Tango Alpha Lima special podcast series honoring the 20th anniversary of 9/11. The entire 20-episode series will be available to download and listen to here. You can watch the full episode featuring Santos here.