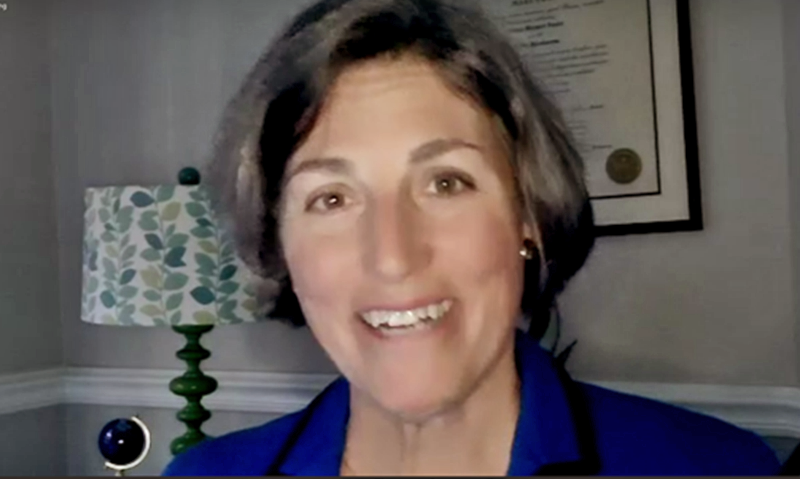 Jessica Vaughan, director of policy studies for the Center for Immigration Studies

This year’s commission meeting focused on reviewing The American Legion’s stance on illegal immigration. As part of the analysis, commission members reviewed nine current resolutions and heard from speakers with the U.S Border Patrol, U.S. Immigration and Customs Enforcement (ICE), and the Center for Immigration Studies.

National Security Commission Chairman Steve Brennan of Maryland said that it’s estimated that 11.4 million people are in the United States illegally; this includes those who have overstayed their visa.

“Forty percent of people in the country illegally are believed to have arrived by visa legally and have overstayed that visa,” said Jessica Vaughan, director of policy studies for the Center for Immigration Studies. “We need to focus on more than just the border itself in order to achieve border security."

The commission asked the speakers what The American Legion can do at the national level to assist their efforts with immigration needs.

“Tell our story. I think a lot of folks don’t understand what we are up against every single day,” said Alfredo Lozano, acting deputy chief of law enforcement operations for the U.S. Border Patrol, and a U.S. Marine veteran.

Lozano shared with the commission that last year, border patrol agents apprehended 1.6 million migrants at the Mexico-United States border. And from October 2021 to today, they have encountered over 800,000 migrants. These stats do not account for recidivism and are not the number of unique individuals but the number of total encounters on the border between ports of entry. Additionally, 75 percent of the people that border patrol agents encounter are single adults. The other 25 percent are families and unaccompanied children – about 400 unaccompanied children are seen every day.

“I’ve been doing this for 19 years, and I can see that the cartels really do shape the environment, really do control who comes into the country,” Lozano said. “They are the gatekeeper for all this activity. That’s the traffic that we are up against. I think that gets lost in translation.”

Lozano gave appreciation to those that assist the U.S. Border Control, such as the Department of Defense, ICE, DHS volunteers, and medical staff which is about 4,000-5,000 personnel. “We couldn’t do our work without them,” he said. But still, the Border Patrol “needs support.”

There are about 19,000 border patrol agents overseeing a population the size of San Antonio, Texas, (over 1.5 million) Lozano said. They are "transporting, processing, detaining, feeding, and caring for these individuals. When they run to us, we give them water, we give them shelter, we give them safety and a lot of times medical services that they haven’t had their entire life," Lozano said. "I have seen it myself.”

Almost 40 percent of U.S Border Patrol men and women “in green” are military veterans. “You have a lot of veterans that come into this service to make it great and what it is.” Lozano also would like to see the Border Patrol have surveillance technology that the military uses out in the field “to actually respond and deploy and resolve. The more we know about what’s coming up from Mexico … the better we can react.” He too wants to see a “100 percent” vetting process.

“The border patrol is so overwhelmed they do not have the ability to screen everyone thoroughly,” said Vaughan, who added this is visible in the increase in criminal activity by illegal immigrants who were removed from American communities and made their way back. Criminal apprehensions went from 2,400 in year 2020 to about 11,000 last year she said.

For there to be immigration reform, a few of the ways Vaughan gave that she believes is for Congress to provide border security, visa security and vetting; provide more steps to prevent illegal employment; promote the value of citizenship; and provide enforcement to the interior of the country with deportation of criminal illegal immigrants, this includes having law enforcement and ICE working together in sanctuary cities.

“The right to vote is one of the last privileges left for citizens,” Vaughan said, adding that the value of citizenship for legal immigrants who become citizens “is what we want to encourage. That is the purpose of our immigration policy is to make new Americans. I think the Legion could be a strong voice in pushing for those policies.”

“Our job is to identify, arrest, retain in some circumstances and then ultimately remove those people that are deemed removable from the United States,” Bible said. “We use intelligence to identify non-citizens who present a threat to public safety, national security or threaten the integrity of the United States immigration system. We receive a lot of our intake, especially this year, from cases that were apprehended at the border.”

“I really appreciate that support. I really do,” said Lozano, who mentioned a local American Legion post was there for the loss of a border agent who passed away from COVID. “I appreciate all that you do. My heart is out to you and thank you for your service.”