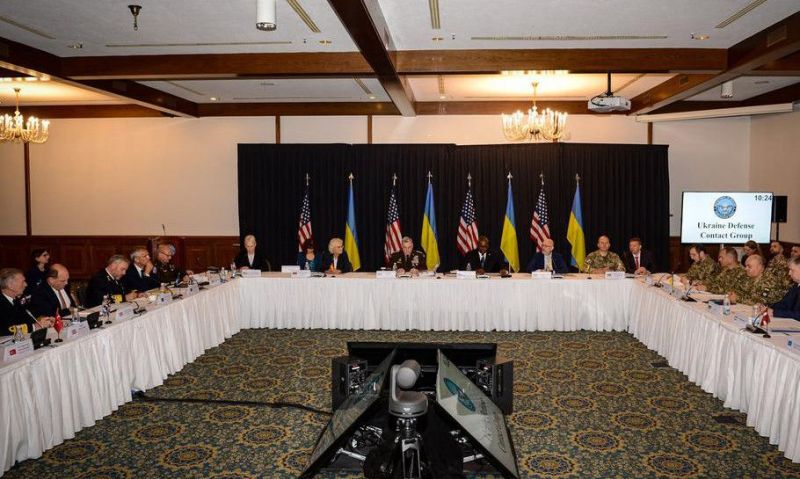 The arms package comes on top of $2 billion in new long-term Foreign Military Financing that the White House says will be supplied to Ukraine and other European countries threatened by Russia.

“We’re here to renew our commitment and intensify our momentum to support the brave defenders of Ukraine for the long term,” Austin said.

It’s the group’s fifth meeting since it first gathered at Ramstein in late April, about two months after Russia launched its full-fledged invasion of Ukraine. Austin chairs the group, which was established to discuss ways allies and partner nations could collaborate to help Ukraine defend itself against Russia.

“Now we’re seeing the demonstrable success of our common efforts on the battlefield,” Austin said.

But “the war is at another key moment,” he said, with Ukrainian forces launching a counteroffensive in the south of the country while Russian forces continue to bombard Ukrainian cities and civilians with missiles and artillery fire.

“The face of the war is changing and so is the mission of this contact group,” he said. “We must evolve as the fight evolves” and commit to “renewing and deepening our resolve to stand by Ukraine – with support and strength that doesn’t hinge on any one battle.”

That includes pushing “all of our defense industrial bases to provide Ukraine with the tools that will need for the hard road ahead,” Austin said, while speaking at the Ramstein Officers’ Club. He was joined by chairman of the Joint Chiefs of Staff Army Gen. Mark Milley and NATO Secretary-General Jens Stoltenberg, among other leaders.

Austin briefly touched on what the group planned to discuss Thursday, to include the next steps since standing up an international training mission for Ukrainian forces.

“We’ve got a lot of work to do today but I know that we’re all going to leave Ramstein this time with even greater momentum,” he said.

Meanwhile, U.S. Secretary of State Antony Blinken made an unscheduled visit to Kyiv on Thursday, where he told Ukrainian officials that the Biden administration had notified Congress of its intent to provide the $2 billion in Foreign Military Financing to Ukraine and 18 of its neighbors. They include NATO members and regional security partners, that are “most potentially at risk for future Russian aggression," according to an Associated Press report.